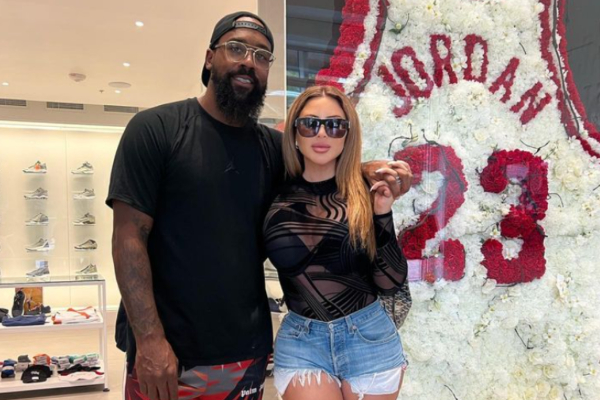 On Tuesday, Larsa, 48, shared a photo standing alongside Marcus, 32, in front of a flower display made in the shape of Michael’s NBA jersey. Larsa tagged the Trophy Room store in Orlando, Florida, where the photo was taken.

“Checks over stripes,” The Real Housewives of Miami star captioned the post.

Her caption appeared to express her allegiance to the Nike brand behind Michael Jordan’s dominating athletic apparel brand. The post is the first time Larsa has posted Marcus to her page in a move that seemingly confirms the dating rumors that have followed them since last year.

She first started fueling dating rumors with Marcus in September 2022, months after she finalized her divorce from Scottie in December 2021. The lengthy divorce came after their initial split in 2016 after 19 years of marriage and welcoming four children.

Larsa has played coy about the status of her relationship with Marcus despite their public dates and paparazzi sightings.

“I have a lot of friends,” she said about the dating rumors. “I mean, I’m very social. I was married for 23 years. This is the time for me to really, like, hone in on my relationships, so that’s kind of what I’m doing.”

But insiders have been confirming the pair are, in fact, dating.

“They are having fun together,” a source shared. “Larsa’s divorce from Scottie was finalized at the beginning of this year and she’s enjoying that freedom.”

With a 16-year age gap and close ties to two former teammates who don’t get along, there’s a lot of controversy surrounding Larsa and Marcus’s relationship. But it’s clear the pair are unbothered by Scottie’s beef with Jordan and Larsa being nearly 20 years older than her beau.