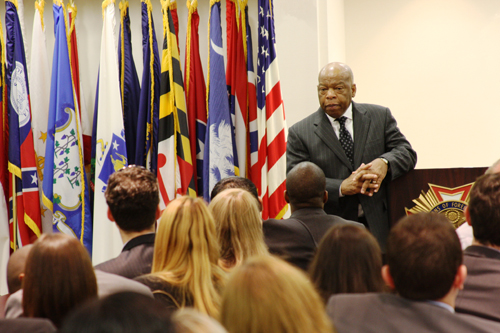 According to The Champion, DeKalb County Commissioners voted on Jan. 26 to erect the figure in Decatur Square to commemorate the iconic freedom fighter’s service during the civil rights movement. He also represented the district in Congress for over 30 years. The confederate statue to be replaced was removed last year January when local governments and detractors removed other historical–yet problematic figures.

Some DeKalb County residents sought the memorial after Lewis died on July 17 at 80 years of age. A formal representation of the congressman has not been finalized.

Members of the Beacon Hill Black Alliance for Human Rights suggested the county recreate Lewis’s depiction from his younger years when he was brutally beaten in Selma by Alabama State Troopers and served as Martin Luther King Jr.’s right-hand man.

“It is our hope that because our youth played such an essential role in the removal of the [Confederate] monument, that a statue of the young John Lewis during his [younger] years will be erected in the Decatur square,” the group said at a July meeting, according to the publication.

“This will be a reminder of how many young people have been a catalyst for change in the world. Where a monument once stood to intimidate and disenfranchise Black voters, soon will stand a statue of an American hero who gave his life to building the movement that ensures Black people have the right to vote,” they added.

A separate proposal in the state government has received bipartisan support. That bill would include Lewis’s statue to be added at the U.S.Capitol’s Statuary Hall, replacing Alexander Stephens– a confederate vice president. Stephens’ notorious “Cornerstone Speech,” said that slavery was the foundation of the Confederacy.

Obama called the iconic leader to give him the news. According to the publication, the gesture and the changes he witnessed over the years moved Lewis to tears.

“It’s hard to believe that in a short time, that we have come so far as a nation and as a people,” he said. “When you look back, the year that Barack Obama was born 50 years ago, black people and white people in the American South couldn’t sit together on a bus or on a train or in a waiting room. And we changed that.”