Lathan, Ealy and Chestnut Star in The Perfect Guy 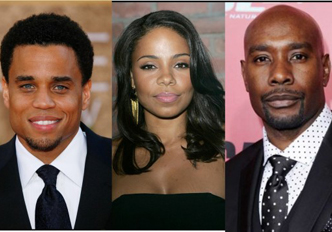 Imagine this: You’re a single woman looking for love and companionship. So far, your prospects have been looking dim to the point that you wish you could’ve made things work with your ex. After a few pointless dates, a handsome, affectionate, ultra-sexy man appears in your life–romancing you, getting to know your family, painting the picture that he’s the perfect guy. Then all of a sudden, he snaps and turns into a nightmare. He stalks you, plays mental and emotional games with you and makes you feel trapped in a seemingly never-ending haze of fear and confusion. How on earth did this happen to you? In fact, how do you get out of this situation?

This is the premise of the late summer release, “The Perfect Guy,â€ which was executive produced by Sanaa Lathan, and stars Lathan, Morris Chestnut, and Michael Ealy. The movie takes you on a whirlwind of emotions, first making you empathize with Lathan’s character, Leah and her quest to find love after a premature breakup with Dave (Chestnut) who seemed like the man she’d marry. Then of course, you loathe Dave and label him as the “bad guyâ€ for breaking Leah’s heart (despite remaining undeniably sexy).Â  And like a knight in shining armor, Carter (Ealy) rescues Leah from her pitiful dates and passionately captures her heart. Within the first 30 minutes, you’ve experienced heartache, anger, disappointment, hope and seduction–and you’ve barely made it through your popcorn! Carter’s personality takes a turn for the worse–making some of our worst dates seem like walks in the park compared to his irrational, violent, and disturbing behavior toward a woman he seemed to worship. There are so many climatic moments including the ones that make you want to passionately cuddle with your man and the ones that have you throwing air punches trying to defend and protect Leah from Carter’s wrath.

How could a relationship turn out to be so terrible when it starts off hitting all of the right notes? Chestnut answers it best, “There’s no perfect guy or woman. Relationships are situations that you have to admire and respect [to make them work].â€ Chestnut, a veteran actor, has been the hero in many romantic movies including Think Like a Man, The Best Man and “The Best Man Holidayâ€ just to name a few. His character in “The Perfect Guyâ€ shows us that looking for love doesn’t mean that you’ll get all of your ideal characteristics met, but there are some sacrifices that are worth much more than others.

This star-studded cast has brought urban drama/suspense to a new level by delivering noteworthy performances, making us think differently about the characters we thought they’d portray versus who they really were and answering our questions about the perfect guy. We can look forward to seeing more of the cast in upcoming releases including Chestnut’s new TV series on Fox, Rosewood, and a new thriller, “When the Bough Breaksâ€ slated for an April 2016 release. There are talks about reuniting the cast of the hit “The Best Manâ€ for “The Best Man Weddingâ€, but we’ll just have to wait and see. Â Lathan is set to appear in an upcoming film “Now You See Me: The Second Actâ€ (2016) and Michael Ealy will appear in a new TV series “Secrets and Liesâ€ (2016).

Grab your ticket for “The Perfect Guy,â€ now playing in a theater near you!