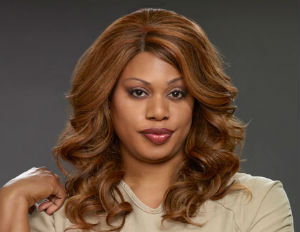 Laverne Cox in "Orange is the New Black" (Image: File)

Marriott International came out last year with its largest ever diversity campaign for the LGBT community that include social, print, out-of-home and digital efforts.

Themed #LoveTravels, the campaign focuses on self-identity, pride, love of travel, sense of home and comfort, and Marriott properties as the place to experience all of it. Netflix’s Orange Is The New Black Emmy-nominated actress Laverne Cox is joining this year’s #LoveTravels pride celebration of the lesbian, gay, bisexual and transgender (LGBT) community an an official ambassador.

On Friday, June 10, Cox will unveil the #LoveTravels collaborative art installation, a collection of original art work submitted from people around the world, and dedicated to transgender lives and leaders everywhere. Cox also will join the Marriott Rewards #LoveTravels float during the Capital Pride Parade on Saturday, June 11. Following a global call for travelers to submit their own artistic expressions of love to the award-winning #LoveTravels campaign, Marriott Rewards received over 3,500 submissions from nearly 100 countries.

For each individual art expression, Marriott Rewards and #LoveTravels will make a donation to support Casa Ruby’s lifesaving mission. Casa Ruby is the only bilingual, multicultural LGBT organization providing critical services to many of the most vulnerable transgender residents of Washington, D.C. The funds will help support Casa Ruby’s Drop-InÂ and Crisis Intervention Center, as well as their Limited Financial Assistance program for those enrolled in career and employment services and to those facing extreme financial hardship.

“For me personally, Marriott Rewards’#LoveTravels creates powerful feelings because of who I am and what it stands for, sharing my vision of a world transformed by acceptance,â€ Cox said in a released statement. “Partnering with a global company that is applying its integrity, its reach and its voice to help break down barriers for all LGBT individuals — it’s truly inspiring for me to join them.â€

Cox is best known for her portrayal of Sophia Burset on the top series for which she became the first openly transgender person to be nominated for a Primetime Emmy Award in the acting category. Orange Is the New Black is heading into its fourth season on June 17 and is renewed for an additional three seasons, giving it seven total.

#LoveTravels kicked off in 2014 with Jason Collins, Geena Rocero, Tim Howard and Angela Simmons celebrating travelers. It continued into 2015 with Diane GuerreroÂ (OITNB, Jane the Virgin) and celebrating marriage equality during Pride.

“It’s our honor to stand with the LGBT community, not just during the month of June, but year round. With the third iteration of our #LoveTravels campaign, we are reaffirming our commitment to equality and using our voice to shine a light on the struggle the transgender community and their allies are currently enduring,â€ stated Stacey Milne, vice president of portfolio marketing strategy & planning, Marriott International. “This time last year, we were on the brink of one of history’s most significant Supreme Court decisions and this year, we’re excited to be back to celebrate an expression of love through art, for transgender lives.â€