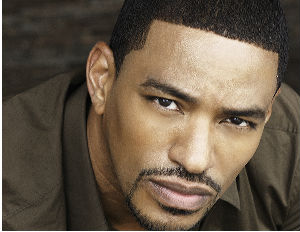 Known for his television roles on shows like A&E’s Breakout Kings, TNT’s Southland and NBC’s latest hit Deception, and his character in films such as Jumping the Broom (2011), Just Right (2010) and Avatar (2009), Laz Alonso has made quite the name for himself in Hollywood throughout the years. And now, with primetime TV shows under his belt–not including his appearances on shows such as Entourage and CSI: Miami– and award-winning movies to his name, fans can only wonder what Alonso has planned next.

As the Cuban-American actor is “a huge fan of Mark Wahlberg,â€ and commends him on his extreme business savvy, Laz is ready to produce award-winning entertainment like that of his colleagues.

“Ideally, I want to create shows, I want to create films and write films and star in them,â€ says the Howard University Business School graduate. “I directed my first short [film] last year. It was a three-minute short… it was my first directorial debut, my first stab at directing, and I loved it. I love being behind the camera. That’s something that I want to really push in 2013.â€

So as the Washington D.C.-born actor looks to take over Tinseltown before the year is up, BlackEnterprise.com talked with the 39-year-old businessman about his love for acting, the importance of business and education in an ever-changing industry, and his sexy co-star, Meagan Good. This man may have graduated from Howard and pursued Hollywood, but don’t fall for the deception because he’s just right!

Black Enterprise: Deception just finished its first season. What was it like for you to act in such an intense role?

Laz Alonso: Well, one thing I don’t like to do is play the same role twice. I try my best to constantly change it up and either by virtue of the script and the story, play something different, or take it upon myself to play something different. I loved everything about Will Moreno’s character when I read the script. He’s very much not your typical FBI agent. He’s madly in love with Meagan Good’s character.

BE: Speaking of Meagan, you’ve played a lot of roles with her over the years. Did anything ever develop between the two of you?

LA: You know what, Meagan and I always had kind of like a younger sister-older brother kind of thing. When we did Stomp the Yard, this was back in ’06, she was a lot younger and I was just always really impressed with the stuff that she had done: her career path and what she had worked on before then. And then, I didn’t see Meagan again until Jumping the Broom [in 2011]. So four years had passed when I saw her again, and…she was an adult. It was like wow, you’ve done a lot in these four years. It was just good to see her playing an adult…playing Paula Patton’s maid of honor. It was just a different dynamic seeing her playing more mature roles.

BE: Do you find yourself protective of Meagan?

LA: You always look out for the best interest of your co-stars, so it’s just being a friend and being protective. Sometimes [fans] start getting a little physical, and you got to let ’em know, like, Whoa! Slow it down; she ain’t going nowhere, but you got to stop trying to pull on her. Different fans show [a] different type of love, and Meagan’s fan base shows a very, very aggressive, strong love.

BE: Aside from Deception, and your multiple roles with Meagan over the years, the new season of Southland just premiered on TNT. Do fans get to see you in another dramatic role?

LA: I [did] not return for another season primarily because I’m a season regular on Deception, and they shoot simultaneously. Schedules conflicted.

BE: That’s a shame. I know fans were excited.

LA: Southland‘s one of those shows that I loved working on because all the extras on Southland are real LAPD. On any type of cop show or military show you have one tech advisor who’s an expert in the field or former military/former cop. On Southland, you have all active duty police officers, so they’re making sure that everything is on point and accurate. And it’s just cool to know a bunch of cops in L.A. You never know when you might need ’em. That’s why the show’s so authentic.

BE: Between Southland, Deception and Breakout Kings you seem to often play an authoritative figure on television. Is that something you look to do or it just happens that way?

LA: My career started off playing a lot of criminal roles and a lot of lowlife, kind of degenerate type guys–but with heart. It was weird because I would always get cast for the guy who did something wrong, and then had a life changing moment. And slowly but surely, as my career progressed, I started playing more [of] the guy [who] was catching those guys. I think more than anything it just has to do with a lot of my background. I went to military school so I know the demeanor. There are a lot of nonverbal languages, language that takes place when you play that type of role. I’ve become branded as the guy that can play an authentic authoritative character with a little edge.

BE: You mentioned you went to military school, but also graduated from Howard University’s Business School. How did you go from business to acting?

LA: It was just kind of a trial and error thing. It was always something that I wanted to do…but you know, I just felt like regardless of what you do in life, everything is still somehow connected to business, so…whether I made it as an actor or not, whatever I did still was going to have a business element to it. My approach was always, I’ll study acting when I’m out of school, but while I’m in school I’ll study something that I can apply to a bunch of different areas.

BE: So between being a businessman and taking over Hollywood, do you ever have time for a social life?

LA: It depends. I would say I have more of a social life when I’m filming just because you need that time to unwind more than when [you’re] not working. I’m more focused on working out, being healthy and cooking my own meals. When I’m working, I just don’t have time to do all that so [I] do tend to go out more for dinner and drinks, and really want to engage in social activity. But being an actor is very similar to being back in school again. You have a full day of things you have to memorize.

When you have 120 people that are relying on you to know your lines and deliver them with emotion and make it something believable, you can’t show up on set and not be prepared. This is NBC; this is the big leagues. Every minute that they go over because you weren’t prepared, it costs money. If it’s your fault why they’re going overtime, then you better believe you ain’t gon’ be working for too long in this business. You have to come prepared and play the role.