LBJ and MLK's complex fight to go "All the Way" 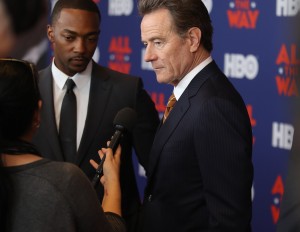 Perhaps one of the most pivotal moments in American history came about with the passing of the Civil Rights Act of 1964; and what happened during that time in the White House ultimately set a tone that changed America forever. This moment in time is captured in HBO’s new film All the Way, starring Bryan Cranston and Anthony Mackie.

The film, adapted from the Tony award-winning play of the same name, examines Lyndon B. Johnson’s roller coaster of a first year in office after the assassination of John F. Kennedy. Bryan Cranston as LBJÂ masterfully embodies the politician from Texas who uses both force and complementary language to persistently persuade the senators, governors, aides and activists working with him at the time. With the need to be on the right side of history, Johnson risks his presidency on what would be an unprecedented Civil Rights Act.

As a result, LBJÂ becomes caught between the moral imperative of Dr. King and demands of the Student Non-Violent Coordinating Committee and the expectations of the Dixiecrats of the southern Democratic Party who helped bring him to power. Those few who felt that America was already ‘great’ and there was no need to change their current way of life [READ RACIST].

Anthony Mackie as Martin Luther King Jr. highlights the frustrations of political maneuvering at that time in Washington. More so, it shows the struggle within the struggle–bringing to the forefront many of the same issues faced today within various movements. We see the powerful testimony of activist and leader Fannie Lou Hamer, played by Aisha Hinds; and become witness to the complex, strong and at times opposing viewpoints of those leading the movement–particularly Stokely Carmichael (Mo McRae) and Bob Moses of the SNCC (Marque Richardson), and activist Roy Wilkins (Joe Morton).

Still, what’s particularly fascinating about the relationship formed between LBJÂ and King was their need to push the country forward. Both men were not saints–they were complicated individuals who were indeed wary of each other’s intentions. But both men agreed the country should be heading toward equality, despite incorporating different methods to do so.

“It is really the heart of the American narrative; this ongoing struggle for 200 plus years between the ideals of America, which are so extraordinary, and the reality of America that is considerably less extraordinary particularly when it comes to race,â€ says writer Robert Schenkkan. “It’s important that, in 2016, when people are often so discouraged about their government and about the practical consequences and effect of government, to see that government can actually do great good for people if that is its intention; if it is used to that regard. It’s good to look back at this pivotal moment where these two men did just that.”

All the WayÂ airs exclusively on HBO on Saturday, May 21 at 8:00 p.m. ET/PT. For more information visitÂ www.HBO.com/movies/all-the-way. All the Way will also be available on HBO NOW, HBO GO and HBO On-Demand.