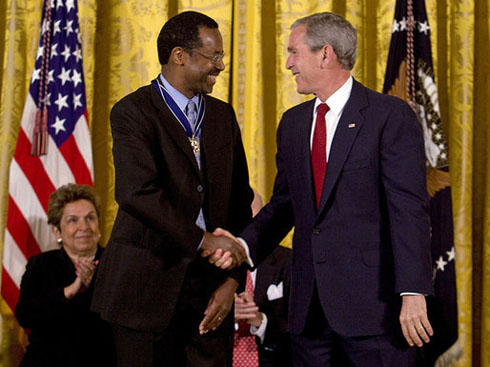 Even receiving the Presidential Medal of Freedom–the highest civilian honor in the nation–didn’t go to the head of renowned neurosurgeon Benjamin Carson Sr. “I don’t know that it’s fully sunk in yet,â€ says Carson, who hopes the honor will bring greater recognition to the youth initiatives he’s working on.

He was among six recipients to receive the distinguished award during a ceremony at the White House June 19. Carson, who in May was featured among BLACK ENTERPRISE‘s list of the nation’s leading doctors, was recognized for his innovative contributions to medicine and his dedication to educating and inspiring the youth.

Under the Carson Scholars Fund, a nonprofit founded by Carson and his wife, Candy, reading rooms are planned for opening in elementary schools to promote youth literacy. Carson is also opening math and science centers in YMCAs and Boys & Girls Clubs across the nation. The fund also awards scholarships to students based on academic merit. “I want all young people to realize you can get the same recognition from education as you can from shooting a 25-foot jump shot,â€ Carson says.

As a youth, fervor for education, a career marked by firsts, and a slew of groundbreaking procedures seemed unlikely for Carson. He was at the bottom of his grade-school class and was constantly teased by his peers. Carson’s mother, Sonya, was a single parent with a third-grade education, yet she impressed upon her children the value of education. They began reading daily and wrote book reports on their selected readings.

Though he battled a violent temperament in his teenage years, Carson went on attend Yale University. After earning a medical degree at the University of Michigan and completing his studies at Johns Hopkins University in Maryland, he furthered his training in neurosurgery in Australia.

Carson went on to cement his legacy when he returned to Johns Hopkins as the youngest director of pediatric neurosurgery at age 33.

In 1987, the Detroit native first garnered international recognition after separating twins joined at the back of the head. He made further strides in the medical profession after leading a group of South African physicians in the separation of twins joined at the top of the head. The Baltimore-based physician is also known for performing cerebral hemispherectomies, a risky procedure where half of the brain is removed to help control intractable seizures.

During the awards ceremony, Bush lauded Carson’s mother for her commitment to her son’s intellectual growth and strong faith. Though Carson says his mother has become accustomed to the recognition, she still “stood up and gave the royal wave,â€ during an audience ovation.

Also in attendance was Carson’s wife and Oscar award-winning actor Cuba Gooding Jr., who will be portraying the neurosurgeon in a biopic.

Despite his numerous achievements, it’s Carson’s work in medicine that keeps him grounded. “I realize where [the recognition] comes from,â€ he says, “It comes from God. If you maintain that perspective you don’t get a big