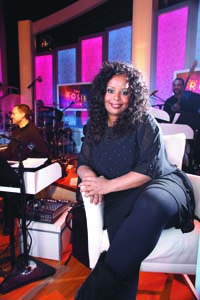 Responsibilities: Composition of music and conducting the band

A classically trained musician, Katreese Barnes began playing the piano at age 10. By age 14, after playing in a band her father managed, she believed she could make music her profession. Originally from Colorado Springs, Colorado, she has since collaborated with the best artists in pop, rock, and soul and has won two Emmys for Saturday Night Live musical numbers. She is currently the only African American female to lead a television band.

Collaborations: Barnes has toured with Sting, Mariah Carey, and Carly Simon, and has written for Roberta Flack and Chaka Khan, among many others.

Training: Barnes received private lessons for seven years from age 10. She has also studied voice, saxophone, and guitar. She recently began studying the fiddle. “The best education has been to work with great talent and great musicians along the way. Being in people’s bands you get to hone in closer to the things you need to be a working musician. Or you learn the kinds of things that are needed to support talent. One thing I would have never learned on my own is how to listen. You have to play with great people to learn to listen because you get the best feedback.â€ Barnes compares listening to great artists to sitting in on a great lecture: “You’re listening to someone who is very wise.â€

Influences: “Roberta Flack is a great singer and a great musician. One of the things she’s mastered is her sense of phrasing–how she phrases a song. If you’re a piano player, you shouldn’t be just playing all the way through her phrasing, but listening to her and learning how to play to her phrasing. Sometimes when people have spent a long time practicing they just want to show off their chops, but it’s a conversation.â€

Job Expectations: Barnes says general responsibilities for a musical director can range from teaching music to booking talent to, in her case, composing the music.

Skill Set: Part of her responsibility is leading the band in the instrumentation of guest artists. “I’m a quick study. What I learned at SNL is that I can compose a lot of music in a short amount of time and execute pretty well. Out of 40 sketches there can be eight pieces of music, which can range from a tongue-in-cheek musical number to a hip-hop track to a quick little jingle. And all of that has to be put together and rehearsed between Tuesday night and Wednesday afternoon.â€

Advice for Aspiring Musicians: “Learning to read music is the bottom line for me. No matter how complex the music is, if someone brings me the score I can understand it. When you can read music, you can troubleshoot problems, you can get gigs, you can take on things last minute. If someone gets sick in a Broadway pit, if you can read you’ve got the job. You increase your chances of working and surviving in a very tough industry. Also understand music technology. People don’t spend what they used to spend [on music production in studios] because they know that things can be produced digitally for less money. You need a command of that today.â€