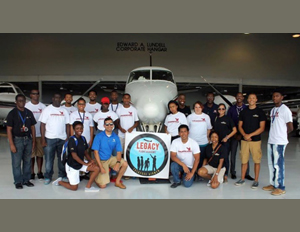 Three years ago in Tuskegee, Alabama, one man’s vision began to take hold. Inspired by the legendary courage and discipline of the Tuskegee Airmen, and grateful for the ways others had supported his own growth and development, U.S. Air Force Maj. Kenyatta Ruffin founded Legacy Flight Academy as a way to invest in the future. “Growing up I had so many people, institutions; even taxpayers, invest in me, that I wanted to invest in youth. This is all about the future and what we can do for others,â€ Ruffin says.

As of 2012, there were 3,139 fighter pilots in the Air Force; 45 of them black, including Ruffin. His vision of African American youth picking up the Tuskegee mantle and pursuing an aviation career in the military is fueled by the force’s low numbers. “Nearly 1,000 men completed training at Tuskegee in the 1940’s,â€ Ruffin says, “so to go from 1,000 to 45 is not encouraging.â€ We may think of the Tuskegee Airmen as men of history, but four of them attended the ceremony at which Ruffin became a major in 2013. Their legacy is embedded in the entire structure and character of LFA. “We want to prepare our young people not just for an opportunity, but to excel.â€

From the time he was 5 years old, Ruffin wanted to be a pilot. As a youngster he got involved in minority aviation programs and flew his first solo flight when he was 14. He earned his pilot’s license at 16–three years before earning his driver’s license. That early exposure, Ruffin believes, was critical to his later success in the Air Force. He graduated from the U.S. Air Force Academy, entering the force as an officer. Now 34, and convinced that the military is a viable career option for black youth, Ruffin uses LFA to promote it as such.

The two-week program takes boys and girls age 15—19 and provides them with flight training and mentorship that prepares them for an aviation career through military service. “Our motto is: know the legacy, live the legacy, grow the legacy,â€ Ruffin says. “It’s important for the students to know what the Tuskegee Airmen did, so we teach them that. It’s also important for them to develop the character traits that the Tuskegee Airmen had, so the students see that the spirit of endurance and camaraderie is still alive today. And we want them to grow the legacy–they are the future. But even if they decide not to pursue the military, they’ll be better people because of the ideals they’ve been exposed to at LFA.â€