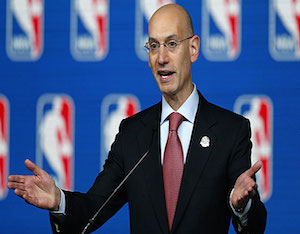 The NBA is a hot topic these days with the season almost 10-games in and deals already making headline news. Commissioner Adam Silver and NBPA Union Executive Michele A. Roberts have already had a public discourse about the future of the league. And now, it seems that Silver is voicing his thoughts on sports betting.

His thoughts, which he recently published in a New York Times op-ed last Thursday, were in favor of legalizing sports gambling. A day later he was already receiving thumbs-up approval from those within the National Basketball Association. First to the bat was Shark Tank star and Dallas Mavericks owner, Mark Cuban, who said, “Adam has it exactly right,” to CBSSports.com.

Professional sports leagues are creating partnerships with fantasy sports websites even as they oppose sports betting. Cuban believes that Silver understands and realizes just how “hypocritical” that whole situation looks. “We all know leagues benefit from the interest in our leagues that [gambling and fantasy sports] create,” Cuban said in an e-mail exchange with CBSSports.com. “In the past for PR reasons, we have put up token resistance to them. I agree with Adam that now is the time to take sports betting out of the shadows and deal with it like the huge business it is.”

The NBA, much like the NFL, MLB, NHL and NCAA, opposes sports betting at racetracks and casinos in the state of New Jersey. However, in the case of the NBA, Silver is advocating to change the law at the federal level and let the leagues oversee the activity of the sports betting business. “I believe that sports betting should be brought out of the underground and into the sunlight where it can be appropriately monitored and regulated,” Silver said.

If this resolution goes through and there is indeed a legalization of sports betting in America, Cuban and Silver stand to make a Brinks truck worth of money.