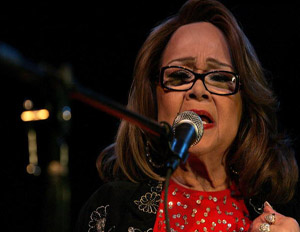 Etta James died at the age of 73 Friday morning, according to her manager Lupe De Leon (Image: Getty)

Etta James, whose powerhouse voice sparked such hits as “The Wallflower,â€ Something’s Got a Hold on Meâ€ and the love ballad “At Last,â€ died Friday morning, according to her manager Lupe De Leon.Â  The New York Times reports James passed at Riverside Community Hospital in California, with her husband, Artis Mills, and sons by her side. She was 73.

The rhythms and blues singer was diagnosed with leukemia in 2010, and also suffered from dementia, kidney problems and hepatitis C. She would have turned 74 Wednesday, according to CNN.
“This is a tremendous loss for the family, her friends and fans around the world,â€ De Leon said. “She was a true original who could sing it all–her music defied category.â€
James, who was inducted into both the Rock and Roll Hall of Fame and the Blues Hall of Fame, is survived by her husband; two sons, Donto and Sametto James; and four grandchildren.