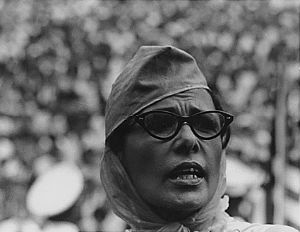 In a never-before-seen video from In Their Own Words: The American Masters Digital Archive, singer, dancer, actress and civil rights activist Lena Horne shares her disappointment in the lack of progress made toward racial equality throughout her lifetime.

Episode two of the American Masters Podcast features Lena Horne discussing the difficulties of navigating the 1940s and 1950s Hollywood studio system and her involvement in the Civil Rights Movement.

“Maybe it’s because I’m a black woman, but maybe because I’m a woman, I don’t see as much as I wanted. I don’t see it happening as much as it happened to us 10 years ago. I think it’s worsened and it’s like the French say, ‘the more we change, the more it stays the same.’ I’m hearing the same old stories and seeing the same old incidents I saw before 1960. And when Paul Robeson told me, ‘that’s alright, your grandchildren will see it better,’ he didn’t know I’d still have to wait. Now I’ve got a great grandson and wonder how long he’s going to have to wait.”
-Â Lena Horne, August 29, 1996, filmed for American Masters — Lena Horne: In Her Own Voice (1996).

Horne was an avid activist, having been long involved in the civil rights movement. She vehemently fought against racial discrimination in the United States, and racism in the entertainment industry. During World War II, while entertaining troops at Fort Reilly, Kansas, Horne filed a complaint with the NAACP because African American soldiers in the audience had to sit in back seats behind German POWs.

She spoke and performed on behalf of the NAACP, SNCC, and the National Council of Negro Women at the 1963 March on Washington. She became allies with Paul Robeson in the liberal organization Progressive Citizens of America and worked with Eleanor Roosevelt to pass anti-lynching laws—this proved to be an unsuccessful campaign. Horne’s political views and social activism resulted in her, along with hundreds of other entertainers, being blacklisted.

Horne, however, did not go down without a fight. Throughout her lifetime Horne continued to speak out against and sued a number of theaters and restaurants for discrimination due to race.

In 1983, she was awarded the Spingarn Medal, awarded annually for outstanding achievement by an African American, from the NAACP.

3 Top Strategies for Getting Closer to Your Clients