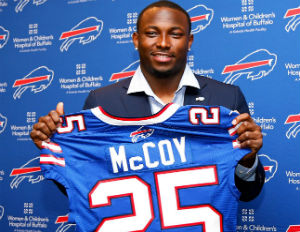 LeSean Mccoy, the recently acquired running back for the Buffalo Bills, is already making headlines. Following his trade from the Philadelphia Eagles in May, and the prompt signing of a new 5-year $40 million deal – which his agent confirmed was worth $26.5 million guaranteed – it seems Mccoy isn’t mincing words with the media about his former team and coach.

In an interview with ESPN The Magazine, he speaks candidly about his feelings on departing Philadelphia, after having grown up in Harrisburg, and playing his college ball in Pittsburgh;

“To be honest, I didn’t want to come. I really didn’t. I was so angry at first. You take a guy who’s made his whole name and career in Philadelphia and move him.â€ says Mccoy.

When pressed about his former coach Chip Kelly and their relationship – LeSean is honest, if not forward: “The relationship was never really great. I feel like I always respected him as a coach. I think that’s the way he runs his team. He wants the full control. You see how fast he got rid of all the good players. Especially all the good black players. He got rid of them the fastest. That’s the truth. There’s a reason. … It’s hard to explain with him. But there’s a reason he got rid of all the black players — the good ones — like that.â€

Taken in the second round of the 2009 draft, Mccoy developed into a three-time pro bowler and two-time All Pro player as a member of the Eagles. He holds the franchise record for single-season rushing yards and earned the NFL rushing title in 2013, he’s also the all-time leading rusher in Eagles history.

“When he got [to Philadelphia], I didn’t know what to expect. When he let DeSean go last year, I was like: “C’mon. DeSean Jackson?â€, Mccoy says in the interview.

DeSean Jackson, like Mccoy, was drafted by the Philadelphia Eagles in the second round (2008) and developed into a pro bowl and all pro player. He holds the distinction of being the only player ever selected to the Pro Bowl at two different positions – wide receiver and return specialist. As reported in 2012, Jackson received the Eagles franchise tag, and signed a new five year deal worth $47 million, with $15 million guaranteed. Following a statistically productive season, Jackson was unceremoniously released by the team in 2014.

Coach Chip Kelly, a highly decorated and sought after coach following his four year stint as head coach at the University of Oregon, arrived in Philadelphia to a team that was coming off of a four win season. Granted final decision on the 53 man roster, Kelly immediately joined an exclusive club of coaches that also held General Manager responsibilities. The following year, the team finished with 10 wins and the Eastern Division Championship.

When pressed by the interviewer for more insight on his statement, Mccoy says that he’s not the only one that’s saying it – “Oh, man. People have heard it. I mean … Stephen A. Smith has talked about it. Other players have talked about it. But that’s one of the things where you don’t even care no more.”

According to an editor’s note on the story, the Philadelphia Eagles have declined to comment.