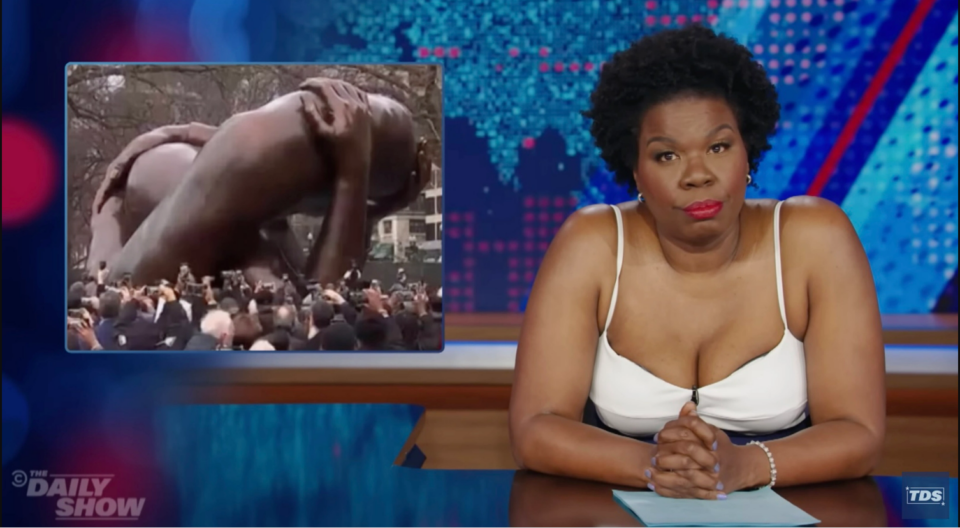 Comedian Leslie Jones has made her mark, filling in as host on Comedy Central’s The Daily Show.

Former host Trevor Noah left the show last month, but before leaving, he gave some manifesting advice. “If you want to truly learn about America, talk to Black women.”

America is definitely listening. Jones is making her mark and came out swinging as soon as she sat down. Vanity Fair calls her hosting style “a signature brand of chaos.” Those are some fitting words, as the 55-year-old comedian had no problem expressing her mind. She started by giving her NSFW thoughts about the Dr. Martin Luther King, Jr. and Coretta Scott King statue in Boston. “Listen, I know Dr. King went down in history, but this is not how you should,” she joked, as told by The New York Post.

She also alluded to the fact that white people need to sit this one out, when it comes to the statue’s criticism. “White people, you don’t need to be saying s*** about this statue. You understand?” Jones said. “Black kids only. You need to sit your a** in the back of the bus for this one, OK? You need to honor this statue.”

Her raunchy and witty humor held no bars regarding the recent news of President Joe Biden being accused of having classified documents in his little red Corvette. “This is a national security emergency, OK? A man this old with access to a Corvette?” Jones quipped. She even gave her interpretation of the woman in charge of giving Biden the documents. Vanity Fair said she joked that she had just “smoked the biggest spliff I have ever rolled in my life” and for Biden to “be cool with documents.” Needing a break from the analytical comedy tactics, Vanity Fair called the jokes “fun and sharp.”

Hopefully, the Saturday Night Live alum will return to her hosting gigs soon as she is only scheduled to host through Jan. 20. Those scheduled for the next coming weeks, like Wanda Sykes, Marlon Wayans, and D.L. Hughley, have some big shoes to fill.

Watch a few clips of Jones in her comedic element on The Daily Show’s YouTube page.