Lessons From a Cross Burning: My Father Used a Hateful Act to Teach Me Not to Hate 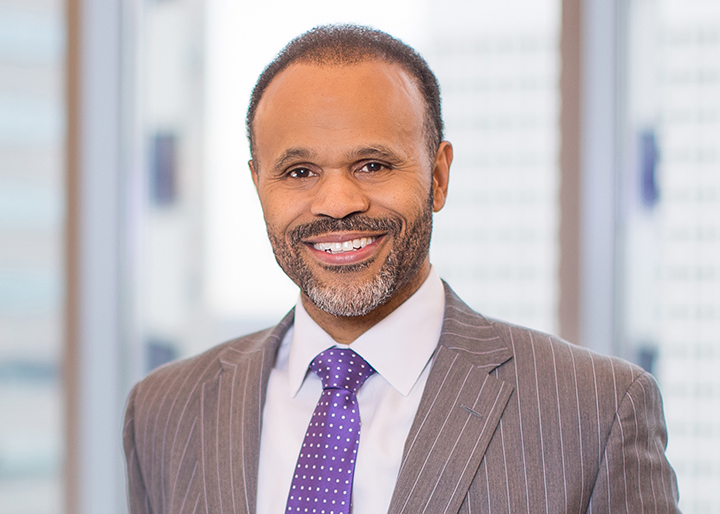 Jonathan P. Harmon at McGuireWoods on December 20, 2017 in Richmond, Virginia.

For millions of young Black Americans, the cellphone video of George Floyd, prone on a Minneapolis street and begging for his life as a white police officer snuffs his last breath, will forever be seared into memory. This barbaric act has become, in our social media-saturated world, a symbol as explosive as the historic photographs of Bull Connor’s firehoses in the 1960s and burning crosses before that. Images do this. They carry a force and a call to action that words cannot convey.

I know that urge to action, as well as the impulse to act out in anger. In September 1979, I was 14 and living with my family in the overwhelmingly white town of Port Jefferson on New York’s Long Island when my parents sat me down and told me that a cross had been burned into the lawn of our neighbors across the street. The Andersons were the only other Black family in our neighborhood of about 100 cookie-cutter houses. Ken Anderson, an Army veteran, was the leader of the local NAACP. I later learned it was the fifth cross burning on Long Island that summer.

I recall the hate that welled up inside me. I wanted to take action against anyone who would do such a thing. What happened next, however, was critical to my upbringing.

Unlike many African American men in this country, I was blessed to grow up in a stable home with a mother and father who loved me and each other. They were neither rich nor powerful, but they were heroes in my eyes because of the little things they did—little things with a big impact—to teach my sister and I growing up.

Don’t confuse that quiet steadiness with cowardice. My parents were active members of the NAACP. My father marched with Dr. King. But his response, dignity and resolve, was to not allow himself or his family to be taken down by bigotry. His message to my sister and me was simple: Don’t hate. Don’t hide. Don’t be a victim.

“Don’t hate” drew on Dr. King’s message that “hate cannot drive out hate, only love can do that.” My father embraced the message that love is the only antidote to hate.

“Don’t hide” means don’t be afraid and retreat from your life. I could see where the cross was burned from my bedroom window, and I had to stand by it in the morning when I waited for the school bus. But there was no talk of leaving our home or our community, no thought of sending me and my sister away to friends or relatives until the threat passed. I was the only Black kid riding the bus, but there was no talk of police escorts, alternative rides, or of changing schools. My father would not even drive me to school that day. His message was that we do not dignify such a lowly act by letting it worm its way inside us and transform us from humans to haters. We would soldier on and pursue a positive path to overcome prejudice. I got on the bus.

“Don’t be a victim” arose from the same impulse. Not surprisingly, reporters approached our home seeking comment. They asked my parents to go on TV. But my father didn’t want ugly vandalism to lower our esteem by turning us into bitter victims. He didn’t want our family to become “famous” for being the object of hatred.

In the four decades since, I have witnessed inequality and discrimination at many levels. After high school, I went to West Point (Class of ’87), and fought in an armored combat division during Operation Desert Storm. That experience gave me boundless empathy for those in uniform—civilian or military—sworn to serve and protect. I understand some of the pressures and stress facing officers in the field of engagement.

My experience at West Point and in the military taught me that it is a privilege to lead others. A leader has a responsibility to exercise authority with compassion, respect, inclusivity and, above all, humility. When leadership turns to arrogance, bad outcomes are almost sure to follow, including the impulse of an officer to put a knee on someone’s neck and exert enough pressure to choke off a life.

I then went to law school and today am a trial lawyer and chairman of an international law firm and consultancy, leading professionals of diverse backgrounds and political affiliations. That includes many former prosecutors, as well as lawyers who devote considerable time to civil rights matters. My wife, also a West Point graduate, worked as a civil rights lawyer.

Recent events have me thinking again about my father’s lessons and how I, as an African American business leader—and, more importantly, as a father—should talk about hate.

I have four children, all of them home now due to the pandemic. As you can imagine, our dinner discussions have been spirited. Will the same messages my father shared work with my kids, or with the younger lawyers in my firm? In a world freshly aware of the brutality of institutionalized racism, is “don’t hate, don’t hide, don’t be a victim” still sage advice?

My oldest son, who has been pulled over by the police multiple times for unknown reasons, is eager to be on the front lines with the demonstrators, tasting the tear gas and risking arrest over his own sense of injustice. He is in about the same place I was when I first saw the Andersons’ yard. His younger sister has an attitude most like mine. She is deeply concerned about injustice but remains positive about America’s ability to heal itself. My other children, in their teens, are in between.

It’s a different world—yet it is not. When I look back at that cross seared into the lawn across the street, I see the important—and positive—role it played in my development, in my sense of self, and in my commitment to work for change within the system. It is one of the reasons I have spent the past 20 years teaching Bible studies with prisoners, from juveniles to hardened felons, doing time in a state and federal prisons. It is never too late to learn not to hate.

I also acknowledge the frustration that each of us has that more than a half-century after the death of Dr. King, we are still witnessing injustices like those rendered on Trayvon Martin and Eric Garner, on Michael Brown and a prayer group at a Charleston church, and, now, on Ahmaud Arbery and George Floyd. Can we as a nation quell these unrelenting flames?

Yes, I believe we can. Like my father, we can check our instinct to react and take strong, positive action to make this a national teaching—a national learning—moment. And then, maybe, just maybe, we can learn not to hate.

The ideas and opinions expressed in this article are solely those of the author’s and not necessarily the opinion of Black Enterprise. Note: A version of this originally appeared in the Wall Street Journal.