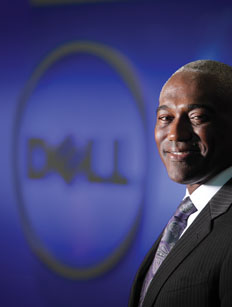 Mel Parker, vice president and general manager of the North America Consumer and Small Office Organization for Dell, knows firsthand that veterans moving into the corporate workforce face unique challenges, particularly in learning and adapting to a corporate culture that might not be as clear and definitive in workplace expectations as a military environment. But veterans also offer strategic benefits from their military experience.

“Everything from establishing mutual trust, building credibility, and learning how to take care of your team counts exactly the same and is as critical and important to corporate success as it was to success in the military,â€ says Parker, a decorated combat veteran who participated in Operations Desert Storm and Desert Shield during the Gulf War and who served with distinction in the 82nd Airborne Division at Fort Bragg, North Carolina.

A graduate of the U.S. Military Academy at West Point, who majored in computer science with a minor in electrical engineering, Parker held a variety of corporate leadership positions, including vice president of North America Sales and Marketing with Newell Rubbermaid and director of sales at Bristol-Myers Squibb, prior to joining Dell in 2009.

Today, he oversees sales, marketing, strategy, and operations at Dell and works to ensure that veterans receive support as they transition to civilian life. He is involved in Dell’s veteran employee resource group, Virtus, named after the Roman deity for bravery and military strength, which is focused on recruitment and retention as well as engaging veterans in the community. “Anytime we can be focused on delivering either products or services to veterans who are either returning from combat or are just getting out of the military, that is a service that we’re proud to be a part of.â€ Here, Parker discusses the benefits:

What can corporate America learn from veterans who are entering the workforce?
Leadership. People who come out of the military tend to be disciplined in their mannerisms, but that discipline also allows them to be prepared for the unexpected. You also get a different maturity level from a young