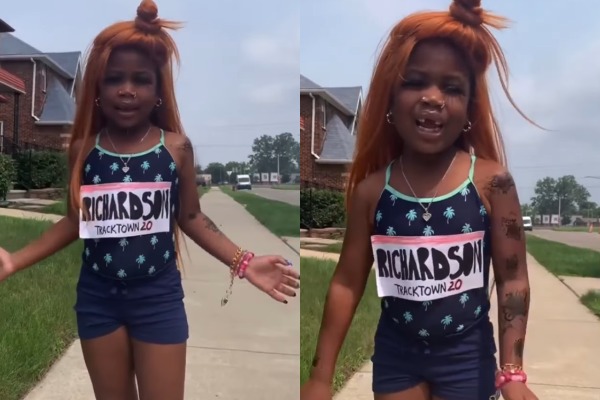 A 6-year-old girl out of Detroit is making media rounds for her impersonation of U.S. track and field star Sha’Carri Richardson.

Mother Kenya White took to Facebook on Sunday to share an adorable video of her young daughter Rosie drawing inspiration from Richardson as she sprints down the street before introducing herself as the star athlete.

“I am Sha’Carri Richardson. I am an American track field sprinter,” Rosie says with pride after sprinting towards the camera. “I’m one of the fastest women in the world. I even qualify for the Summer Olympics. I’m sure you heard about that,” she adds.

The young girl closes the video by asking for her supporters to “pray for me like my grandma did when I qualified for the Summer Olympics.”

“Let me run!” Rosie shouts before running off into the distance.

When sharing the wholesome moment of her daughter on Facebook, White made reference to a phrase Richardson has used to describe herself.

“Guess who was sprinting through the streets of Detroit, Michigan. It’s “THAT GIRL!!!” White captioned the video.

Richardson isn’t the first prominent Black woman that her daughter has dressed up as. It’s something she says her daughter does quite often, Yahoo News reports.

“Rosie is known to make videos that portray famous black women. She saw She’Carri Richardson on the news and asked could we do her,” White told Storyful.

“I didn’t think twice before I said yes because she’s current news and has a distinctive look. Rosie nailed this impression as she does every time but this time she went in full character. I even noticed that Rosie is fast at running.”

There has been an ongoing debate over Richardson being suspended from the Tokyo Olympics after testing positive for marijuana. Amid the backlash over the decision, World Athletics President Sebastian Coe said that rules around the use of cannabis by athletes “should be” reviewed, Reuters reports.