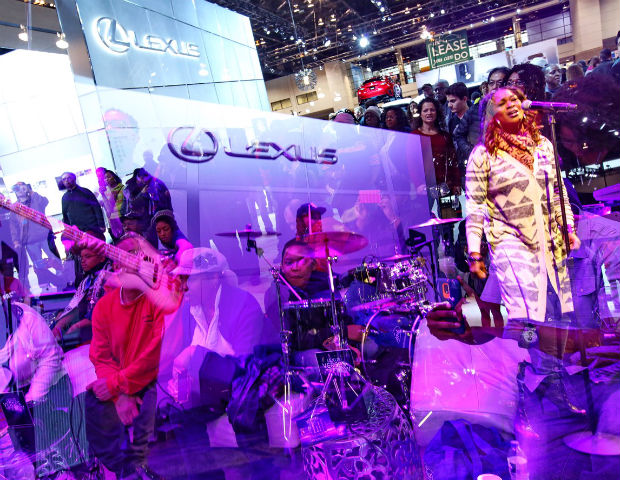 The Chicago Auto Show wowed the crowd inÂ BE Good Life fashion, and Monica Coleman of M320 Consulting was there to capture the images. With more than 1 million square feet of exhibit space, the Chicago Auto Show is the nation’s largest auto show. The nine-day show concluded Feb. 24 and boasted a 7% increase in attendees from a year ago, according to event coordinators.

“TheÂ ChicagoÂ Auto Show is one of the largest shows in the country, so it was the perfect opportunity to showcase both the new GS F and the amazingÂ talentÂ of artists with roots in this great city,â€ said Stacy Henderson, Lexus’s advertising planner.

Lexus Verses & Flow capitalizes on the resurgence of spoken word and is known for pairing dynamic performances byÂ prominent R&B artists with the luxury experience synonymous with Lexus. The show was nominated for a 2013 NAACP Image Award for “Outstanding Variety Series or Special” after the success of the broadcast program on TV One. It eventually grew to include a live, national music tour.

On Friday, Feb. 13, emerging artist Andra Day wowed audiences at First Look For Charity, the Auto Show’s fundraiser, with unique neo-soul versions of familiar rock, pop, and reggae hits. Carl Thomas, remembered for chart toppers like “I Wish” and “Emotional” which were released under the legendary Bad Boy Records, belted out original music and coversÂ on SaturdayÂ that were perfect for Valentine’s Day.

Daron Pressley (@daronpressley) is an entrepreneur and former Fortune 500 sales and marketing executive who has been featured on outlets including Fox45 News, Black Enterprise magazine, and The Washington Post. Knowledgeable in marketing and branding, Pressley works with professional athletes, organizations, and individuals to develop strategies to create, build, and grow brands. As a speaker Pressley has reached more than 20,000 students. He provides dynamic insights on leadership and branding via his websiteÂ DaronPressley.com