Prepping Players for Life after the NFL 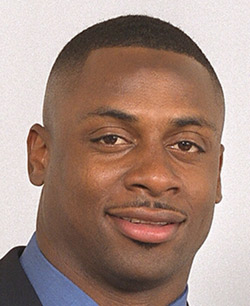 As the NFL’s Vice President for Player Engagement, Troy Vincent is charged with helping players prepare for life after football. His biggest challenge, he says, is simply getting those players to listen. A former All-American at the University of Wisconsin and a Top 10 pick in the 1992 NFL Draft, Vincent played in five straight Pro Bowls, was twice named All-Pro, and suited up for four different franchises before finally retiring, after 15 successful seasons, in 2006.

Despite his experience both on and off the field, the ex-defensive end has found it to be no easy task helping players adjust to life off the gridiron. Though the league is dedicating ever-greater resources to Vincent’s initiatives, and players are given ample opportunity to pursue any number of educational opportunities during their time in the game, the simple fact remains that most don’t start thinking about their post-football lives until it’s too late.

In a recent interview, Vincent talked about the league’s increasingly broad player engagement programs–programs that now reach all the way into the high school ranks–and the myriad of challenges he faces as the league’s go-to guy for education and life planning. –Dr. Jason Wingard

What is the current scope of the NFL’s Player Engagement program?

I think it’s safe to say that nobody in the world of sports, no other league, is doing anywhere near as much as we in the NFL are right now. Our player engagement program covers all the bases and is now broken down into three separate entities–NFL Prep, NFL Life and NFL Next. Prep is all about amateurism–the high school and the college players, and their parents. Life is about engaging with the current players, and the families of players, as they work their way through the league. And Next is focused on life after football.

It’s interesting that the league is reaching out to high school and college student-athletes, given that those aren’t “yourâ€ players yet.

Yes, but we think college outreach is hugely important. We have a partnership with Why Not Sports and Nike Leadership that focuses on our Prep platform. I also visit colleges all over the country, doing comprehensive one-day events. I meet with the athletic director and the head coach. We talk about academic success. We also talk about perception and planning [about careers in football]. And we not only talk to the entire football team, but also anybody else who touches the football space. We’ve been a real bridge-builder.

So what, ultimately, is the long-term strategy behind the Prep program?

So often, we hear from our players, “Man, if I had only known this then, maybe I could have been a little bit better prepared later on.â€ We want to avoid that. And let’s face it–at the end of the day, the NFL inherits the players that are produced at the high school and college level. We have to touch those guys before they get here. We’ve got a high school dropout epidemic, which ultimately has a major impact on our labor pool. Guys coming into our league don’t have degrees, and nobody questions it. That’s why we need a platform outside of the player engagement piece. If I can identify the problems sooner, if I can touch him sooner and stay with him along the way, then I can set expectations. And if a young man really thinks that he wants to play on Sundays, we can tell him what he needs to do–not only to get into the league, but to have a successful life. Football can be a catalyst to learn life lessons but playing professionally doesn’t have to be the ultimate goal.

Both you and the league are very forthright in telling college players that they should not come out early–that they should stay in college until they get their degrees. Why?

There is just one transferrable life skill. That’s education. I’m just telling these student-athletes the truth. And the truth is this: By age 25, most people will be done playing football. Which means, of course, that you’re going to have another 55 years of living to do, and you’re going to have to do something to make some money. A lot of players say they want a college coaching job, but the thing is, you can’t even get a coaching job without a degree. I’m just trying to put the emphasis on reality here. Yes, I tell players to keep dreaming about the NFL. That’s important. Dreams are what drive us. But when you talk about the National Football League, you also have to understand the reality of what the experience in the league is like.

Moving forward, what else do you hope to be able to accomplish?

Right now we’re focused on identifying what our challenges and opportunities are–the challenges and opportunities for the players and for the league. We want to figure out what the biggest issues are for the players, and then help them navigate through their experiences. We’re currently seeking corporate partners that share similar values and interests to be able to provide additional resources for our Prep, Life, and Next platforms. We also want to expand our Career Transition Program and service offerings for former players. We’ll continue to do career development. But we’re also looking at player wellness and mental illness. There, we are looking hard at prevention–prevention and education about what those issues are and how they can be avoided. We’re also looking at the players’ families, and helping them understand how to handle crises should they arise. Really, I think we’re so very far ahead of any other professional sports organization right now. And my plan is to make sure that we continue to keep setting the bar higher and higher.