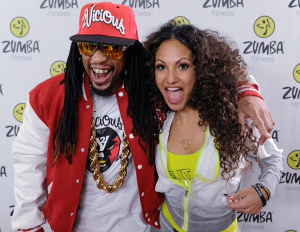 For the last decade, the words “Yeahâ€, “Okâ€ and “Whatâ€ have been synonymous with Grammy award winning artist Lil Jon. After penning numerous club classics, the artist returned to his roots DJing and has been touring around the world.

Today, Zumba Fitness announced its teamed up with Lil Jon to launch their first-ever nightclub series, which will combine the party atmosphere of a Zumba class with the turntable styling’s of Lil Jon for an amped up club experience.

These “exercise in disguiseâ€ fitness parties take place when nightclubs are usually empty. By holding the sessions in venues with club lighting, sound systems and other special effects, these events hope to attract established Zumba fans as well as those who have never tried a Zumba class.Â  Since these classes take place during off hours, when most nightclubs are closed for business, it opens up an entirely new revenue stream for the venues.

Sessions will be led by Gina Grant, who is a globally recognized Zumba instructor who has performed in nationally televised events.

“This nightclub series is such an incredible opportunity to get the world to dance and be healthy. The nightclub is the perfect venue for this andÂ Lil JonÂ ‘s DJ skills will light up the room with energy!” she said.

“Fitness and health are important to me, and Zumba fans hit me up all the time tellin’ me how my songs and voice motivate them to get them through their workout,” saidÂ Lil Jon, who recorded his newest song “Workâ€ specifically for Zumba. Â “Now we’re helping to bring the Zumba experience to the nightclub scene. I’m excited to DJ this tour and give Zumba fans a fitness party they’ll never forget!”

This is not Lil Jon’s first entrepreneurial endeavor. The rapper has had an endorsement deal with Oakley since 2005 as well as a brand ambassador for Don Julio tequila. He also plans to launch his own clothing line named “2Viciousâ€ later this year.