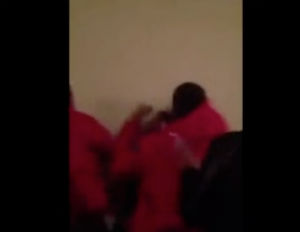 Young Chicago rapper Lil Reese’s career may be in a world of trouble after a video was released earlier today showing him beating up his alleged child’s mother.

While the victim of the attack has yet to be identified and confirmed as his child’s mother, CKHID.com is reporting that it was her. There is no confirmation yet that Lil Reese even has children.

Reese and the unidentified woman go back and forth in the video in an argument of sorts when the woman tells him to “keep his hands off her face.” After the woman instructed him to keep away, Reese attacked her with a flurry of punches.

The video, which lasts a little over a minute, was uploaded to the website Worldstarhiphop.com earlier this morning.

We refuse to link out to the video.