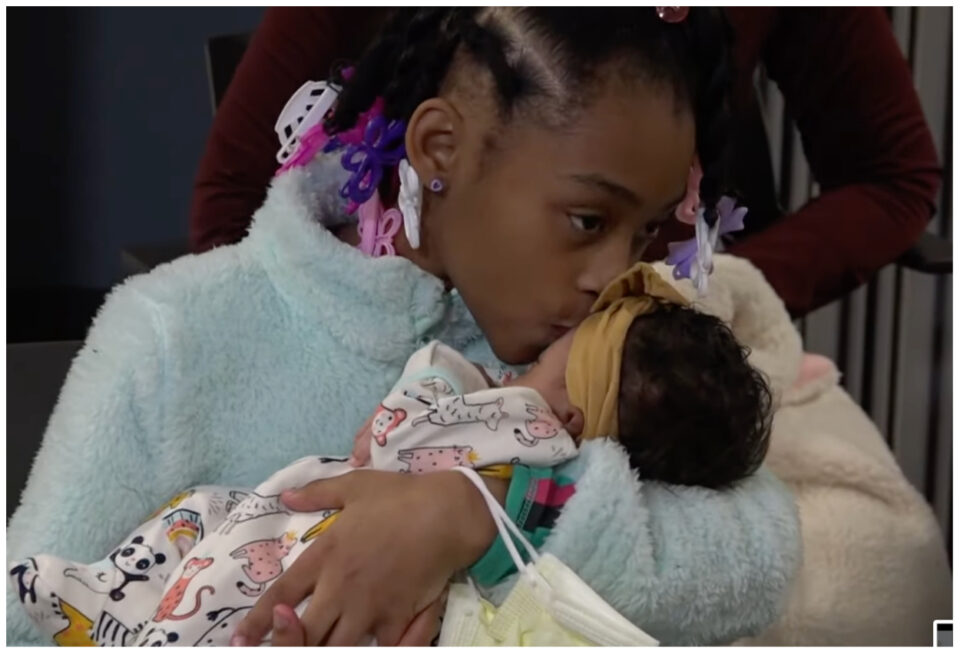 Local dispatcher Scott Stranghoener answered the call and instructed Miracle on what to do. The little girl was able to coach her mother and keep her calm through the process and in 11 minutes, Miracle had safely helped her mother deliver a baby girl named Jayla. She also has a 5-year-old little sister named Taylor.

“Hi, I think my mom is in labor,” said Miracle. “Don’t sit on the toilet. Mama, they said lay on your back in the center of the bed or on the floor.” After Stranghoener told her that she would have to help deliver the baby, Miracle replied, “Huh?” However, she quickly recovered and did everything as she was instructed.

After Jayla was born, Miracle was able to wipe off her face with a towel, keep her warm and help to stimulate the baby to cry, all before the paramedics arrived to take Jayla and Fair to the hospital.

“She did amazing. she never questioned anything,” said Strangheoner. “She did exactly as she was asked and we’re left with a beautiful baby girl.”

According to North County Fire & Rescue, Miracle followed all the instructions she was given to a tee and is being called a local hero for her bravery.

“Miracle followed all of the instructions given to her over the phone, and when mom didn’t cooperate, she broke out her own ‘mom voice.'”

North County Fire and Rescue First Responders and Central County 911 got dressed in their uniforms on Nov. 16 to honor the little hero, according to KMOV. Miracle received a special certificate and a personalized shirt from CCE911. She was also given a pink stork pin typically given to EMS providers after delivering a baby in the field and a tablet.

Fair said that her daughter was hands-on during the surprise delivery, and she was thankful.

“Miracle was like, in my face, hands-on,” said Fair. “She was like ‘you okay? You need anything? Need to lay down? Why can’t you lay down? You need my help?’ And I was like ‘no.’ I was very thankful.”

Miracle also seemed thankful for Jayla’s arrival. “She’s really cute. She doesn’t cry a lot and I get to hold her a lot,” she said.