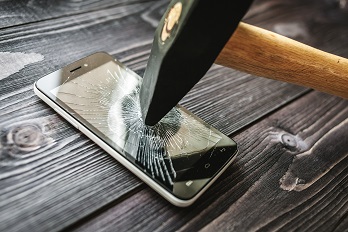 As a millennial, I thought it was going to be really difficult to live without my iPhone for six days. But, as it turns out, life without a cell phone wasn’t as hard as I thought. Â Instead, I found myself feeling more content, focused, and less internet-dependent.

I was initially disheartened when my iPhone 6S took its last breath, and I was told that I was going to have to wait three to five business days for a new phone. Granted, a brand new iPhone 6S was shipped to an Apple store near my job and I was given a temporary replacement phone free of charge, but this still meant that I had to be phoneless for a few days. In other words, no Snapchat, no Instagram, no texting, no phone calls, no Google Maps, or constant access to the internet.

Nevertheless, I survived, and here’s what I learned:

1. We’re Magnetically Attached to Our Phones

During this time, I couldn’t help but noticeÂ how many people kept their eyes glued to their screens while in public–especially on the subway. Instead of starring at my own phone, I was forced to look at them, so I discovered the simplistic joy in people-watching. This also confirmed my theory that we have become a gadget-dependent society.

Because I couldn’t rely on Google Maps to give me step-by-step directions during my commutes, I had to look up traveling directions on a computer in advance, and then find my way to a destination. I was initiallyÂ very apprehensive about this, due to my horrible sense of direction, but–surprisingly–this worked. In fact, it actually helped me improve my sense of direction, since I was forced to pay more attention to streets and landmarks, rather than listening for Google Maps to tell me when to turn right and left.

3. We Can All Live Without Phones

Those six days also helped me realized that I could truly be happy living without a cell phone. During this time period, IÂ wasn’t pressured into checking social media multiple times throughout the day. Instead, I lived in the moment and focused on getting things done. When I attended after work events instead of Snapchatting, I was eager to engage in real chatting–like, with real people. I also felt more content with my life, since I couldn’t subconsciously compare myself to the hundreds of people I follow on Instagram and Snapchat.

Although this was a very positive experience, I must admit that I wouldn’t go days withoutÂ a phone by choice. As a woman, I felt less safe, since I didn’t have the ability to dial 911 at any given moment. Plus, there’s no way I would have been able to cope if something extraordinary happened and I couldn’t document it on social media. For example, had I met the Obamas, orÂ BeyoncÃ©, or witnessed a “Worldstar” moment, I would have been distraught!