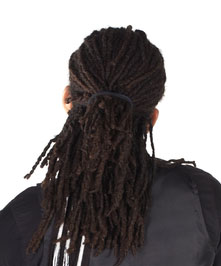 The recent news of a lawsuit between a man wearing ‘locks andÂ the Virginia movingÂ company that allegedly refused to hire him because of themÂ brings light to the issue of appearance vs. aptitude.

Christopher Woodson, who reportedly has 14 years of experience in the moving industry, applied for a job at Lawrence Transportation Systems, and says they wouldn’t hire him as a loader because he would not cut his hair, an action that would go against his Rastafarian beliefs.

So, a company passes on what seems to be an experienced candidate just because he has locks down his back? Give me a break.

Since when does a hairstyle trump qualifications or a resume full of experience? How would his locks hinder him from doing a great job at the company? Would it be because if he swings his head too hard, he might injure himself or others?

Lawrence Transportation defended its decision, stating, “We are in the household goods moving business which requires our people to go into customers’ homes and to have close personal contact with them. Our policy states that hair, facial hair, beards and general grooming must be neat, clean and trimmed.â€

(Might I point out that Mr. Woodson offered to tie up his hair or wear a cap?)

Many of us in professional arenas recognize that office culture is set by the tone of the company, its CEOs, and often its client base. For example, you’d know a McDonald’s server, a UPS worker, or a Fed Ex employee simply by his or her attire. I’ve seen employees from those companies work in a timely, professional manner whether their hair was spiked, locked, gelled, curled, braided, blond, black or blue.

We know that we are not our hair; butÂ most of us in the black community do see itÂ as an extension of our individuality and culture. For Woodson, it is more than that. It is part of his spirituality. Why should someone suppress their desire to wear their hair however they please if it has nothing to do with how well they will perform?

Just look at the Williams sisters, who took their braided styles straight to the top of the tennis ranks and have earned lucrative endorsement deals. Don King, with his flame-like ‘fro, made millions in the boxing industry. Tony Shellman‘s crown of locks didn’t hinder him from starting successful lifestyle brand Enyce, and Cornell West, with his tousled Afro, has been a prominent social and political author, educator, and speaker for more than a decade. And let’s not forget Ursula Burns, who wears her short natural proudly while serving as CEO of Xerox. I could go on and on.

Companies with such stringent and uncompromising stipulations are sending quite a dangerous message in this tough economic climate: It’s a message that says an excellent resume, proven results, and verifiable references could mean nothing if you don’t have something as superficial as the right hairstyle.

Does one give up their religious and cultural beliefs, or simply their right to choose how they want to style what grows naturally from their head, just to gain employment and pay the bills?

I’d like to think we live in a professional world that knows when to compromise especially when it comes to rewarding hard work and productivity, not who has the best press-and-curl.

Tell us what you think: Did Woodson do the right thing by refusing to cut his locks? Or is the moving company right for sticking to their policy?