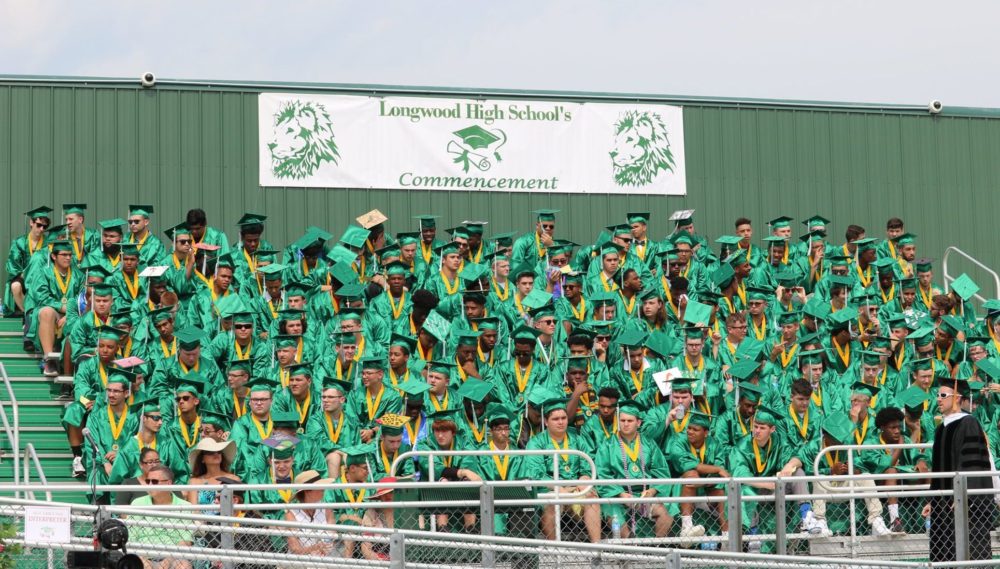 In the photo, young black men ages 16 to 18 are standing in a single-file line while holding the back of the head of the person in front of them. Their attorney says they were coaxed into the pose by their high school science teacher during a class trip in November. The image was later included in a slideshow that featured a picture of an ape, followed by the image of the boys, with the captions “Monkey See” and “Monkey Do.” Now, the parents of the students intend to file a federal civil rights suit against the Longwood Central School District for $12 million, reports Newsday.

“Longwood High School’s teachers deliberately created a grossly racist slide show in which African-American Longwood High School students were labeled as ‘monkeys,’ and compared with slides of monkeys and a gorilla,” said attorney John Ray, who represents the students, according to Patch.com. He added that it caused the students to feel “ridicule, embarrassment and shame, anxiety, fear and emotional harm.”

A notice of claim (a precursor to the $12 million suit) was served on the school district Wednesday. The notice alleges that school officials threatened to suspend one of the students in the photo after he used his phone to record video of the slides when they were shown during his zoology class. The student also shared the footage on social media and refused to delete it. He, however, was not suspended.

“Then Longwood’s administrators tried to coerce students to destroy the evidence of the slides. These students are deeply wounded and shamed. This is intolerable,” said Ray.

Ray contends the photo of the students was intended to look like “The March of Progress,” a commonly used illustration that shows man evolving from apes to Homo sapiens during the course of human evolution.

“This is not just a case of racism. This is a case of someone asserting racial inferiority of African American people,” said Ray.

Desmond Dent Jr., 16, who was pictured in the photo, said it taps into the racist history of comparing African Americans to apes, which dates back generations and has been used to justify slavery and Jim Crow segregation. “I was horrified because African Americans have been through this already and it’s coming back again,” said Dent at a press conference. “We should not be compared to any animal.”

Ray added that the “offensively racist slideshow” was intended to mock the honor students and left them feeling “insulted and humiliated.” The school, however, issued a statement arguing that the offense was not intentional and was, rather, a result of the teacher’s “lapse of judgment.”

The Longwood Central School District has been made aware of a culturally insensitive photo involving Longwood students during a class trip to the Bronx Zoo. The photo was an unfortunate lapse of judgment.

Without the intent of doing so, the photo was taken without fully understanding the sensitivity or the hurt it may have caused and reminds us that we must be more aware of the feelings of our multi-cultural population.

Since returning from winter break, the Superintendent and High School Administration have met with the teacher, members of the community, and the families involved.

We are proud of the diversity at Longwood Schools, and we will continue to provide sensitivity training to our students and staff to raise awareness of our cultural differences.

Nevertheless, Georgette Grier-Key, president of the Brookhaven Town NAACP, wrote a letter demanding that district officials take more action. “We can’t sit by and allow the greatest gift on Earth — our children — to be left in the hands of adults that are bullies, ignorant, unqualified, ill-equipped, or insensitive,” Grier-Key stated.