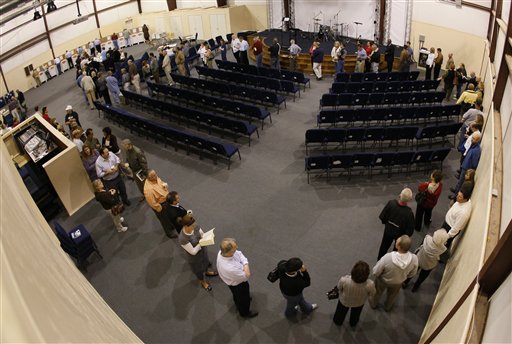 Voters line up to cast their ballots in Edmond, Oklahoma. (Source: Associated Press)

CHICAGO — After what may feel to many like one of the longest presidential campaign seasons in America’s electoral history, Election Day has finally come. When it’s all over, more than 130 million voters are expected to have cast ballots for either Sens. John McCain or Sen.Â Barack Obama.

Indiana is one of the first polls to watch. It is a traditionally red state that has not voted Democrat since 1964, and will be the final stop on the campaign trail for Obama, probably in part because it borders his home state of Illinois. If John McCain loses Indiana, it will be an indication of a long, difficult night for the Republican.

The state has dispatched 30,000 poll workers to 5,400 precincts, Indystar.com reports.

Long lines are a common sight, but so far not voting problems have occurred. The Associated Press has also reported that there are long lines throughout the state and voters have been urged to try to arrive at their polling precincts before 3 p.m. In addition, Jim Gavin, spokesman for Indiana’s secretary of state reports that the Hoosier Voter Helpline has received phone calls about possible violations, which are now being investigated.

The polls are open from 7 a.m. to 7 p.m. in Colorado, another swing state Obama hopes will help him defeat McCain. So far, 64.6% of the state’s voters cast their ballots by mail or at early voting locations. Still, according to a local television station, 9News, there have are long lines at many sites and problems at two polling places.

Nearly 2.6 million ballots have been cast in North Carolina, and this huge level of enthusiasm may have as much to do with the heated Senate race between incumbent Sen. Elizabeth Dole and her Democratic challenger Kay Hagan and a tight race for the governor’s mansion, as it does the presidential election in which the state is a major state to watch. If Dole loses, January will mark the first time in decades that there will be no Bush or Dole on Capitol Hill or in the White House.Â

Voting got off to a delayed start, with 300 people in line shortly after 7 a.m., at one Raleigh precinct when the chief judge left the ballots in her grandson’s pickup, CNN reports. Voting will be extended there by about 30 minutes. Other than this slight mishap, few problems and massive lines are expected because so many voters took advantage of the opportunity to have their say during the state’s early voting period.Â

In St. Louis, Missouri, polls opened this morning at 5:30 am and the line reached around the corner, reports the St. Louis Post Dispatch. In anticipation of the wait, voters brought portable chairs and blankets for the cold.Â