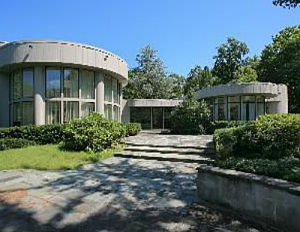 According to Zillow, Matthew Krauthamer paid $1.5 million for the five-acre mansion in New Jersey.

Zillow says the mansion is “fit for an ’80s pop superstar, with round, sunken rooms, skylights, white couches and glamorous walls of windows. And it has been vacant for years, giving it a frozen-in-time feeling.”

It was built in 1987 and is where Whitney married Bobby in 1992. It reportedly has five bedrooms, six bathrooms, two Jacuzzi’s, a massive pool and a tennis court.

It had been on the market for three years when Houston passed away two years ago.

Krauthamer who also lives in the neighborhood, says he has no plans to turn the mansion into a museum dedicated to pop idol. He tells Zillow a fresh coat of paint and some new appliances will return it to its original ’80s glory.

He says he’s been contacted by numerous filmmakers and fans wanting to see the home, but he won’t be looking to exploit the deceased singer’s fame.

He also says he plans to move in soon. When Houston’s estate failed to sell the home, an investment company bought it in February for $999,900.