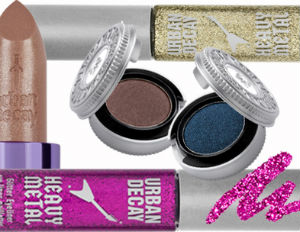 Adding to its presence in the fast-growing market for higher-end makeup, French beauty and skin care giant L’OrÃ©al, the world’s biggest cosmetics company by sales, announced on Monday it has agreed to buy Urban Decay Cosmetics. While L’OrÃ©al didn’t disclose financial details, The Wall Street Journal estimates the French company is paying between $300 million and $400 million to purchase Urban Decay.

Based in Newport Beach, California and founded in 1996 by make-up specialist Wende Zomnir, Urban Decay is known for its bright color palettes, it’s edgy, “punkâ€ packaging and proactive product names such as “Perversionâ€ and “Stray Dog.” French conglomerate LVMH MoÃ«t Hennessy Louis Vuitton, the luxury goods company headed by Bernard Arnault, bought Urban Decay in 2000, then sold the company to the private-equity firm Castanea Partners three years later. Since that time Urban Decay has had sales of $140 million over the last twelve months, more than three times its revenue when Castanea bought it in 2009.

He described Urban Decay as “the makeup specialist we need to fully satisfy young women in search of playful colors … at an accessible price point.”

Urban Decay is also very outspoken on its refusal to test product on animals and markets itself as being ‘100% vegan.’ Fans are watching closely to see if the makeup brand remains cruelty free after being purchased. The brand recently declined doing business in China because of China’s law that required cosmetics companies to have their products tested on animals in laboratories before they could be marketed in that country.

Urban Decay is mainly available through specialty beauty retailers such as Ultra and Sephora, rather than mass-market retailers. The market for specialist make-up brands represents 44 percent of the luxury cosmetics market in the United States. Urban Decay will now be alongside LancÃ´me, Yves Saint Laurent and Kiehl’s in L’OrÃ©al’s luxury division. Luxury is L’OrÃ©al’s second-largest division after its consumer products of mass market brands, such as Maybelline mascara and Garnier shampoo.