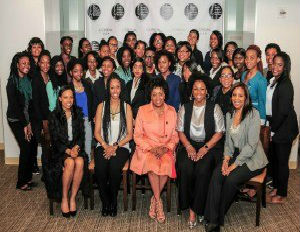 Throughout the week, students experienced a broad range of opportunities. From two full days with mentors and professional and personal development workshops to expose them to the realities of the workplace, to a visit to the National Museum of the American Indian, WBLS-FM, and an “Immersionâ€ at ESSENCE magazine.

“In addition to our multi-year partnership, we are proud to have awarded more than $15,000 in scholarships annually to the Role Model program students,â€ Ms. Nelson noted.

According to a press release statement, the Role Model program has some notable success stories among former mentees who return to the annual event to encourage and provide an example of the benefit of the program to the students. Natalee Facey, an advertising professional who participated in the Role Model Program in 2010, spoke at the opening ceremony; Raven Robinson, also a 2010 participant, was a panelist following the documentary screening, and Kemoy Harris, MD, who participated in 2007, addressed the young women at the closing ceremony.

“We had another exceptional program this year and from the early feedback of the participants, we have definitely exceeded our goal of helping these young women to be their best selves and to embrace their power as they chart their unique paths,â€ said Avalyn Simon, president of the New York Coalition of One Hundred Black Women.