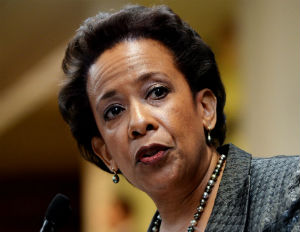 The New York Times reports, U.S. Senate approval of Loretta E. Lynch as U.S. attorney general, Thursday, April 23, 2015. Lynch is the first African-American woman to head the department of justice, ending the tenure of previous attorney general, Eric Holder, and a more than five month wait and debate over her nomination.

Its reported, Ms. Lynch, former United States attorney for the Eastern District of New York, was confirmed 56 to 43, with ten Republicans, including Senate Majority Leader Mitch McConnell, joined Democrats. Texas GOP Sen. Ted Cruz was the only senator not to vote.

McConnell, had previously outlined parameters holding off Lynch’s vote, until finishing work on an unrelated human trafficking bills. The bill passed on Wednesday by a vote of 99 to 0, and proceeding regarding the attorney general vote commenced.

President Barack Obama selected Lynch to replace Attorney General Eric Holder in November and her nomination cleared the Senate Judiciary Committee in February. Still, she waited more than twice as long as the seven most recent U.S. attorneys general combined for a vote on the Senate floor.

Lynch, 55, has earned a reputation as a highly qualified, but low-profile prosecutor who has a good relationship with law enforcement and a history of handling tough cases well.

Nominated by President Obama, he called his pick tough, fair and independent, and said anyone would be hard pressed to find a person more qualified for the job.

“She has spent years in the trenches as a prosecutor, aggressively fighting terrorism, financial fraud, cybercrime, all while vigorously defending civil rights,” he said back in November. “Loretta might be the only lawyer in America who battles mobsters and drug lords and terrorists and still has the reputation for being a charming people person.”

Some conservative groups Â called on Senate Republicans to block a vote on Lynch altogether because of her stance on the president’s immigration policies. Many Senate Republicans feared the party would face serious political repercussions if it blocked an African-American woman with strong credentials and enthusiastic support from many in law enforcement.

“She is a historic nominee, but also Senate Republicans are making history,â€ Senator Patrick J. Leahy, Democrat of Vermont told the New York Times. “And I would say for the wrong reasons.â€ He added: “I can only hope that Senate Republicans will show her more respect as the attorney general of the United States than they did as a nominee.

Check out social media reactions to her appointment and the delay in process:

What a wonderful day it is!>>Senate Makes History By Confirming #LorettaLynch As U.S. Attorney General http://t.co/W7LYAlm2tH

“I am very pleased that #LorettaLynch has now been confirmed as America’s next Attorney General.â€ –President Obama

I don’t care if @SenTedCruz @tedcruz voted no earlier on #LorettaLynch cloture vote. Taxpayers expect you to show up for work! Embarrassing.