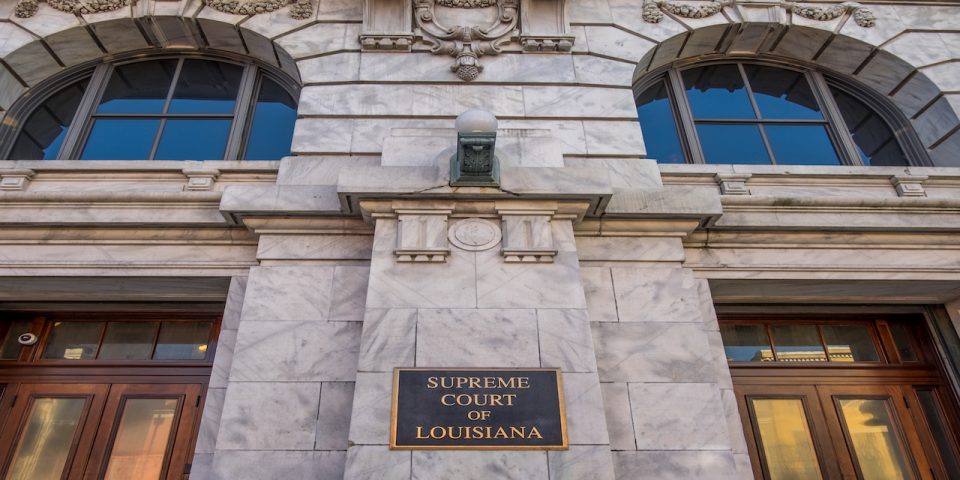 The entrance of the Louisiana State Supreme Court. Image Twitter/@FedSoc

The Louisiana Supreme Court declined to review a Black man’s life sentence for stealing a pair of hedge clippers, citing prior bad acts.

According to The Root, Fair Wayne Bryant has spent the last 23 years at the Louisiana State Penitentiary at Angola for stealing a pair of hedge clippers. Last week, the Louisiana Supreme Court denied a request to have Bryant’s sentence reviewed in a 6-1 decision. The one justice that voted in favor of Bryant was Justice Bernette Joshua Johnson, the only Black person in the group.

“Mr. Bryant has already spent nearly 23 years in prison and is now over 60 years old,” Johnson wrote in a statement. “If he lives another 20 years, Louisiana taxpayers will have paid almost one million dollars to punish Mr. Bryant for his failed effort to steal a set of hedge clippers.

“This man’s life sentence for a failed attempt to steal a set of hedge clippers is grossly out of proportion to the crime and serves no legitimate penal purpose,” Johnson added.

Bryant had four previous felonies on his record before his last arrest. Bryant’s most serious and only violent crime was an attempted armed robbery of a cab driver for which he was convicted in 1979 and served 10 years in prison. Bryant’s other crimes include possession of stolen goods, forging a check, and breaking and entering.

When Bryant was convicted in 1997 for stealing hedge clippers, prosecutors cited the state’s repeat offender law which “allows prosecutors to seek harsher sentences for lesser crimes if a defendant has previous convictions,” The Washington Post reported.

Justice Johnson said the repeat offender laws are the “modern manifestation” of the “Pig Laws,” which she said were designed to keep Black people in poverty during the Reconstruction era.

In 2000, Bryant argued to Louisiana’s 2nd Circuit Court of Appeal that his sentencing was “unconstitutionally excessive.”

In its ruling the court wrote the “litany of convictions and the brevity of the periods during which the defendant was not in custody for a new offense is ample support for the sentence imposed in this case.”

Bryant kept appealing and won the possibility of parole, which he was previously denied. However, his motions to have his sentence reviewed, in which he argued that he “received an illegal sentence and should have been appointed a lawyer during a resentencing hearing,” were denied by higher courts including the state Supreme Court, which denied his motion on July 31.

Louisiana, which has been accused of treating its inmates like slave labor, has recently found itself in the middle of the recent call for the elimination of Confederate statues in the South.