As Kevin Ware Cut Down Nets, Fiskars Scissors Gets the Big Stage 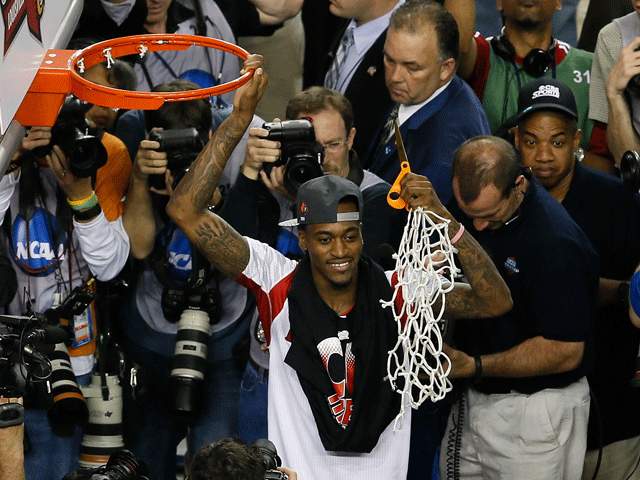 Kevin Ware is undoubtedly the face of the 2013 NCAA Tournament, and Adidas and the scissors company Fiskars are two major benefactors.

The seriousness, trauma and aftermath of the injury suffered by Louisville guard Kevin Ware made him the face of the 2013 NCAA Mens Basketball Tournament, the most watched in nearly two decades. A symbol of remarkable resiliency and strength, Ware gave an extended, emotional interview to ESPN and even appeared on The Late Show with David Letterman.

And so late Monday night, more than a week after he broke his leg in the Regional Final against Duke on national TV, Ware got his moment. After Louisville overcame a double-digit first-half deficit to down Michigan, 82-76, the basket was lowered for their hero. Ware snipped away, eventually holding the net — and the scissors — in the air triumphantly.

This year marked the fifth consecutive year Fiskars, makers of the ubiquitous orange-handled scissors, have teamed up with the NCAA as the official net-cutting scissors of both the men’s and women’s basketball championships.

And yet, Ware’s career-threatening injury has become a flash point for critics of the NCAA who say that players aren’t adequately compensated for the billions of dollars their labor puts into its coffers year after year.

Sales of a specialty shirt Adidas produced and sold for $25 were halted last week due to what Adidas called “use of a logo issue.” The shirt read, “Ri5e To The Occasion.” A tribute to Ware, players could be seen wearing the shirt during the national championship against Michigan.

Louisville guard Peyton Siva was among Ware’s most outspoken teammates in the aftermath of what many deemed Adidas’ exploitation of Ware’s injury: “I don’t think it’s right.”

“For him to get the notoriety, I think it’s awesome,” Siva said according to USA Today. “But as far as profits and everything, it kind of sucks, him being in college that he can’t really see any of it. Hey, they give our school a lot of money so in the end it works out for both.”

Louisville said that it “proactively decided to waive any traditional licensing royalties revenue” related to the shirt. Its cut has reportedly been diverted to its scholarship fund. Sales figures of the shirt had not been released.

Many point to Ware’s injury as the perfect validation of the antitrust suit brought against the NCAA by Ed O’Bannon: The suit challenges whether the NCAA can solely profit from players’ names, images and likeness without compensation to the players. As it were, in such a financial arrangement, Ware would see some of the proceeds from sales of the shirt or other apparel related to his injury, recovery, or likeness.

Fiskars could not have known it was going to be mired in such a discussion regarding Ware, because it had no way of knowing that Louisville would win Monday night. But for its part Tuesday, Fiskars and President Paul Tonnesen, in a statement made available to BlackEnterprise.com, congratulated Louisville’s team and acknowledged the meaning of Ware being able to cut down the nets.

“Congratulations to the entire Louisville team and coaching staff on a tremendous end to the 2013 season,â€ Tonnesen said through a spokesperson. “Each year the celebration holds special meaning due to the unique experiences that lead each team to victory, and this year we won’t forget the team camaraderie and motivation that culminated when Louisville’s Kevin Ware was handed the orange-handles to conclude the 2013 NCAAÂ® men’s basketball championship net cutting ceremony.

Asked if Fiskars would pursue a relationship after Ware was no longer an amateur, a spokeswoman said, Fiskars “does not pursue relationships with individual players or teams beyond the net cutting ceremonies.”