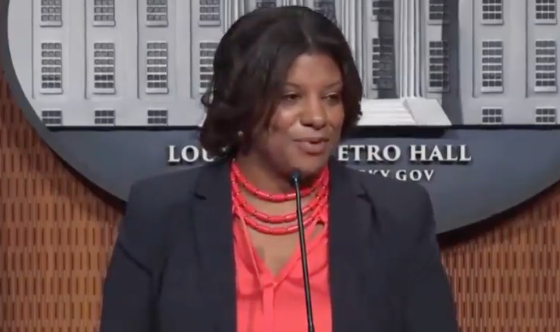 Starting in October, Louisville, Kentucky’s next police chief will be a Black woman.

Yvette Gentry, previously the city’s deputy chief of police, is the first Black woman to lead the city’s police department and the third Black person to serve as police chief.

The death of Breonna Taylor in Louisville has polarized the country and has caused millions around the country to call for justice against the police officers responsible. Louisville Mayor Greg Fischer said he selected Gentry because she wants to help “reimagine public safety and address systemic racism.”

“We wanted somebody right now that represents some independence of viewpoint so that we could move forward with that,” Fischer said at a news conference announcing her appointment on Monday.

In an emotional speech, Gentry expressed how Taylor’s death has impacted her. She discussed her hopes to bring change. She will start in October after current interim chief Robert Schroeder retires. Gentry is the third interim chief the police department has had since Taylor was killed in her home back in March.

“I prayed, and even when I wanted to change my mind, God had already told me it was the right thing to do,” Gentry said. “For all of you who urged me to take this position and try to move the needle, I’m here…” I will just say [that this] is just a glimpse of how a lot of people have been feeling for a long time, and we can’t go back.”

“I think our city is at a point of reckoning that only truth can bring us out of,” she added. “I’m not here just to help you unboard your beautiful buildings downtown,” Gentry said. “I’m here to work with you to unboard the community that I serve … with all of my heart in West Louisville that was boarded for 20 or 30 years, and I just could not find the help. So, I’m here to help you do that because you promised to help me do that.”