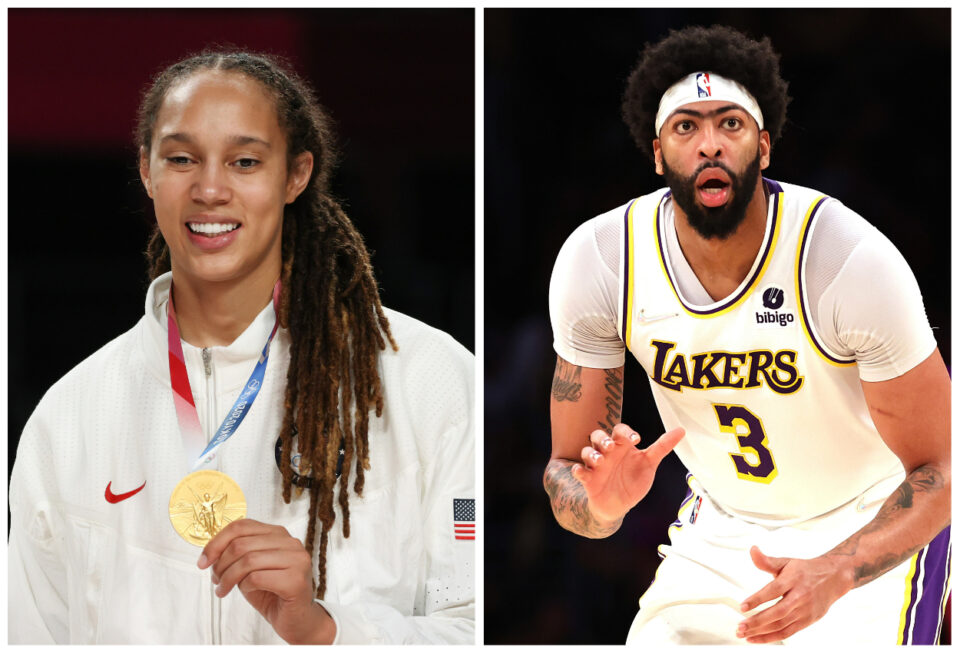 Left: SAITAMA, JAPAN - AUGUST 08: Brittney Griner #15 of Team United States poses for photographs with her gold medal during the Women's Basketball medal ceremony on day sixteen of the 2020 Tokyo Olympic games at Saitama Super Arena on August 08, 2021 in Saitama, Japan. (Photo by Kevin C. Cox/Getty Images) Right: LOS ANGELES, CALIFORNIA - APRIL 03: Anthony Davis #3 of the Los Angeles Lakers looks on after being defeated by the Denver Nuggets 129-118 in a game at Crypto.com Arena on April 03, 2022 in Los Angeles, California. NOTE TO USER: User expressly acknowledges and agrees that, by downloading and/or using this Photograph, user is consenting to the terms and conditions of the Getty Images License Agreement. Mandatory Copyright Notice: Copyright 2022 NBAE (Photo by Sean M. Haffey/Getty Images)

Amid debate over Brittney Griner being handed a nine-year prison sentence in Russia for traveling with vape cartridges, rumors about the WNBA star’s love life have crept to the surface.

Over the weekend, The Sports Rush recalled 2015 reports that linked Griner to NBA star Anthony Davis in the wake of her divorce from WNBA star Glory Johnson. At the time, Griner filed to annul her marriage to Johnson after the couple conceived twins through IVF, People reports.

Griner claimed she only married Johnson under pressure and was not involved in the IVF process. But Johnson said otherwise, claiming Griner was the one who picked the blonde-haired, blue-eyed sperm donor. In the wake of their messy split, Griner was eventually linked to then-New Orleans Pelicans star player Davis.

The pair kept the relationship under wraps, but Davis reportedly touched on his feelings for Griner at the time.

“She is everything to me… We have an amazing relationship and have so much in common,” Davis allegedly said. “We even wear the same size clothes and shoes, so sometimes she borrows a shirt or two from me.”

The rumored romance came two years after Davis shut down rumors of being engaged to Griner.

“Whoever made that rumor up about me being engaged is corny,” Davis tweeted in January 2013. “I am NOT engaged people!!”

Whoever made that rumor up about me being engaged is corny. I am NOT engaged people!!

The engagement rumors have reignited amid Griner’s prison sentence.

Griner has been in Russian custody since February when she was arrested at Sheremetyevo International Airport in Moscow after the Russian Federal Customs Service found vape cartridges containing the marijuana concentrate hashish oil in her luggage, CBS Sports reports.

Earlier this month, the seven-time WNBA All-Star and two-time WNBA Defensive Player of the Year was found guilty of drug charges and sentenced to nine years. Griner’s defense team plans to appeal the charges.