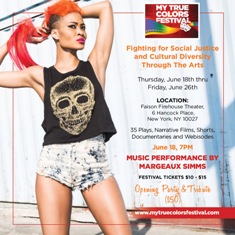 Simms is most recently known for her appearance on the popular VH1 TV series. The Canadian Jamaican fashion designer (HOFM line) and singer/songwriter says she is crafting ethereal electronic Hip Hop that evokes emotional swag through and through. SImms released her EP “Animal House” and has worked with producer Nellee Hooper (No Doubt). Her new EP will drop this summer.

Simms is joining My True Colors Festival Ambassador Richard Pryor Jr. The comedian, actor and singer relaunched his career in 2006 in New York City as a tribute to his late father, comic genius Richard Pryor. As a child, Richard Jr. introduced his dad’s shows and hasn’t stopped performing since, including lead roles in various theater productions. He received a 2015 MAC Award nomination for outstanding performance in a Musical Comedy for his cabaret show, “Life, Love, and a Little Laughter.â€ Pryor works within the LGBTQ (lesbian, gay, bisexual, transgender, and questioning) community using his voice as an African American gay man.

MTCF’s 2015 lineup of artistic work is for and by LGBTQ storytellers and people of color. This year’s festival is comprised of 35 plays, theatrical performances, narrative features, documentaries, shorts, and webisodes spread across the country and around the globe.

Special events during the festival include a Make Music New York showcase on June 21, featuring a sneak peak at Invisible Life The Musical, based on the book E. Lynn Harris with music and lyrics by Motown legends Ashford and Simpson. In addition to a DJ Teddy Douglass spinning club mixes from the Invisible Life The Musical soundtrack, there will be a one-on-one conversation with director Poteus Spann. Also slated is a screening of the documentary Out On The Tracks, which follows gay Guyanese soul singer Nhojj and his groundbreaking “Made To Love Him” music sessions-same-sex renditions of classic hetero love songs.

“The L Word 2.0,” June 22, is a day of programming dedicated to women, includingÂ  an up-close conversation with dramatist Ntozake Shange talking about the 40th anniversary of the choreopoem For Colored Girls… and its Broadway revival. Also slated is the premier of the webseries Dyke Central, about a group of 30-something queers navigating life, love, lust, and adulthood in the lesbian Mecca that is Oakland, California.

With the media hype fest around Catelynn Jenner, the festival will host a panel discussion on mainstream media sensationalism of the Trans experience on June 23, which has been designated as “T-Day,” featuring workshops, screenings and talkbacks relevant to the transgender community. This includes a screening of Brothers, an original narrative webseries about a group of transgender masculine friends in Brooklyn, New York. Also, the screening of the documentary The Rebirth of Paris, an informative follow-up to the film Paris Is Burning legacy (1980s documentary that brought voguing and drag culture to wider audience). The Rebirth of Paris is told from the perspective of Ballroom’s new generation.