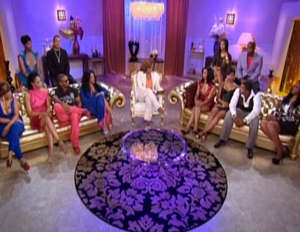 The cast of 'Love and Hip Hop Atlanta' stood center stage on social media during the entire season (Image: VH1)

If you watched ‘The Reunion Part 2′ of Love and Hip Hop Atlanta on Monday night, you most likely tuned into your “second screen,â€ which undoubtedly led you to the barrage of tweets and Facebook messages about the show. And even if you weren’t watching the LAHH spinoff (or tried to duck the conversation taking place on social media), you didn’t stand a chance escaping the social chatter. That’s been the case throughout the VH1 reality program’s entire season.

The numbers are in, and LAHHA ranks as this summer’s most social television show, excluding sports programming. According to social analytics company Trendrr, the show produced over half a million social interactions per episode, which translates to 200,000 more social interactions than the second most social program WWE Monday Night Raw. Social activity for LAHHA is up 302% over season 2 of LAHH, which featured Yandy Smith, Jim Jones and Chrissy Lamkin, among others.

The majority of LAHHA viewers are young, urban females, who, without a doubt, take to the web to discuss shows–everything from juicy details regarding a character’s love triangle to more serious topics surrounding upcoming career and business moves. While that alone has allowed the show to surpass summer broadcast and cable hits such as Breaking Bad and True Blood, the engagement can be linked to the cast members live tweets throughout the show.

“It’s the most entertaining second-screen experience you could ever have watching a TV show,” VH1 President Tom Calderone told entertainment and media analysis site TheWrap. “It’s not just comments made during the show but participants in the show retweeting things, commenting with the audience; it’s the fastest game of tennis I’ve ever seen online.”

Not only does VH1 encourage cast members to tweet while the shows air, they have a digital strategy that includes on-screen calls to action, live after-show discussions with the show’s participants, and products like the network’s mobile app Co-Star–a tool that aggregates fans’ comments on any episode, as well as allows users to answer trivia, browse photos and watch exclusive videos.

The network’s efforts to capitalize on their social engagement displays across the board with VH1’s programming, but LAHHA‘s recent social success led the network to become the fourth most active non-Olympic cable network between June and August 22.

With the second season of Basketball Wives LA starting September 10 comes another opportunity for VH1 to work its way up the social engagement ladder.