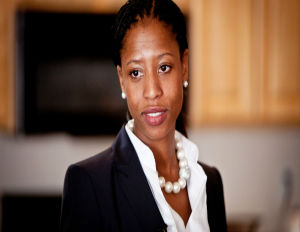 In Utah, a state where nine out of ten people are white, Mia Love, a daughter of Haitian immigrants has managed to become the mayor of Saratoga Springs, Utah and is now on track to becoming the first black woman Republican in Congress. Love is now leading incumbent Democrat Jim Matheson in the polls.

Love has a lot of powerful backers in the state of Utah, not the least of which, the Mormon church and her (white) Mormon husband, Jason Love. But Love, 36, Â cites her policies and her conservative ideals, as the reason for her success, not identity politics. Though a daughter of Â black Haitian immigrants, she focuses more on her conservative values and agenda than her background or her race.

Yet as the N. Y. Daily News reports, in a Republican party struggling to attract people of color and keep the confidence of women, it is precisely her race and her gender that are powerful factorsÂ in her bid to become a Republican member of Congress.