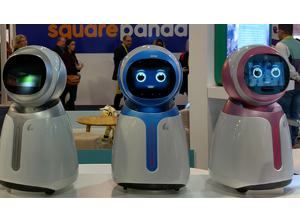 CES 2017 came and went. Every year the show, which is already huge, seems to get even bigger. Organizers spared no expense in delivering a fantastic conference since this year marked the 50th anniversary of CES.

The big hits at the show were vehicle tech, internet-connected home devices, robots, and tech products to teach kids skills such as programming.

There was also some incredible tech beauty products. The O’2 Nails Mobile Printers lets you print any design you can imagine on your nails:

YouCam Makeup, a company that creates virtual makeovers for selfies with an app, launched a new product that works with makeup outlets such as Sephora. Using the YouCam new app, you can virtually try on makeup from Sephora and then go into Sephora and purchase the cosmetics.

The iGrow is an FDA 510k-approved hair growth device. It grows hair using Low-Level Light Therapy. This is a therapy that “utilizes laser or light energy below a specific energy threshold and within a specific wavelength,â€ according to iGrow’s manufacturers. The founder of the company says there is clinical evidence to show that this therapy triggers cellular activity leading to hair growth.

There were robots all over. Many were concierge robots, designed to offer customer service at business locations. LG demonstrated its robot built to help customers in airports. The robot rolled across the stage at LG’s event.

There was so much to see. As a journalist who has been to CES for the past four years, I was also delighted to see more African Americans at this year’s show than previous years. I’m eagerly anticipating a special showcase dedicated to the amazing technology coming from Africa in 2018.

Watch the video below for a quick and dynamic recap of the technology at CES 2017: