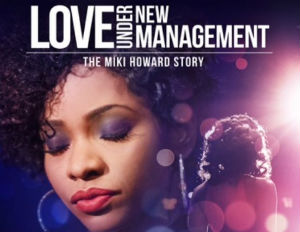 This Sunday, June 12, TV One will premiere the first film inspired by the popular Unsung series, Love Under New Management: The Miki Howard Story. Starring rising star Teyonah Parris as Howard, the film takes a deeper look into the story behind Miki Howard’s career; both her breakthroughs and successes, as well as the intense personal and business struggles she had to endure. We recently sat down with Howard and Paris to talk more about the film and why now is the time to tell her story.

BlackEnterprise.com: What made you decide that now was the time to tell your story?

Miki:Â The TV One folks over at UnsungÂ aired my episode, and it received really good ratings. They thought the story was palatable. I think the story is timely in that some people are going through a lot of the issues that I faced. They asked me if I would like to do a biopic, and I said absolutely.

Miki: When you’re young, you want to be in love and your body is telling you to have babies.Â  There are a lot of hormonal things going on [laughs]. Coming from a very religious background, we’re taught to get married or you’re fornicating. I was rattled with guilt to be a “fornicator.” I felt I wanted to get married, that’s what life is about–procreating. That’s all you know when you’re not taught better and you’re very young. So, yeah, it was in every song. When I hear “Lemonade,” it cracks me up, because I remember those days. Right now I’m 55 going on 56, and I’ve had all kinds of boyfriends and lovers. When you’re young, you think about it, you write about it, you talk about it, you sing about it, but as I’ve matured things are different.

How did you deal with a demanding industry as a single mother?Â

Miki: I really think I was the best parent I could be. I love being a parent. I got to take them everywhere and do everything that I wanted to do with my children.

As I’ve grown, I’ve loved being a single parent–I don’t need anybody’s influence. When I got married and someone wanted to discipline my children, I would think, “Who the hell are you?” I know it’s hard and difficult, and it’s not fair to the children, but it’s better than if you have a bad spouse. It’s worse if you have a parent that’s coming home drunk or beating your kid–it’s just better to do it by yourself.

You’ve had quite the career journey, especially after seeing the film. Where does that tenacity to keep going come from?

Miki:Â I’m sure because this is in my blood; it’s in my DNA. I’m going to sing and rock out no matter what. That’s what I do. I was really born to do this, this is not a choice. It’s something I have to do.

Nice. So, how involved were you in the casting of the film? Â

Miki:Â I loved working with the director, Christine Swanson. She was very passionate about telling my story. Mostly everyone in the film is a friend of mine. Teyonah, who is a Juilliard graduate, brought over some great actors she knewÂ from Juilliard to complete a really stellar cast. I love them; they did a great job.

I told Teyonah, now when I hear my name, I see her face.

That’s quite aÂ compliment. Teyonah, how did you approach the role of Miki?

Teyonah: We didn’t have a lot of time. Once I signed on to the project, I think we had two to three weeks. Miki and I spent two weeks together; it was a crash course in Miki Howard. When I went to visit her, we really sat and talked. She was so open about her life and really willing to share what I wanted to know. She called family and friends, and I talked to them and her children.Â Everyone was so welcoming and excited. I tried to suck everything I could out of them in the short amount of time we had.

A major point in the film touches onÂ drug abuse. Miki, was it an escape for you?

Miki: I thought I was partying, and it got out of hand. I really didn’t know who I was. I looked in the mirror and thought, “Who is this?” I thought it was someone else who had broken into the room, and I was ready to fight. It was me in the mirror, and I didn’t recognize myself. I just had a lot of time on my hands after I got blackballed and no one would work with me, and I couldn’t sing, so I thought, “Let’s just party!” But there was really a deeper issue there.

Â Miki and Teyonah, what do you hopeÂ people to take away from the film?

Miki: I’m strong and we all feel this way. You may not talk about it, but we all want to be loved. People find themselves in difficult and sometimes compromising circumstances, and they need to know that you can walk away and change. You don’t have to accept the situation you’re in. There are many people out here to help you.

I think it’s more poignant now that we see that we keep losing so many people to drug abuse, and we don’t even know they’re abusing drugs.

Teyonah: I think this film will inspire people. It’s really a story about what it takes to overcome adversity. Not just overcome it, but excel afterwards; to really pick yourself up and continue to fight to be the person you always wanted to be. I think people will be inspired by her story, by her tenacity, by her sheer desire to have the life she wants to have and watch her create it; despite what’s stacked up against her.

Love Under New Management premieres June 12 at 8/7c on TV One.