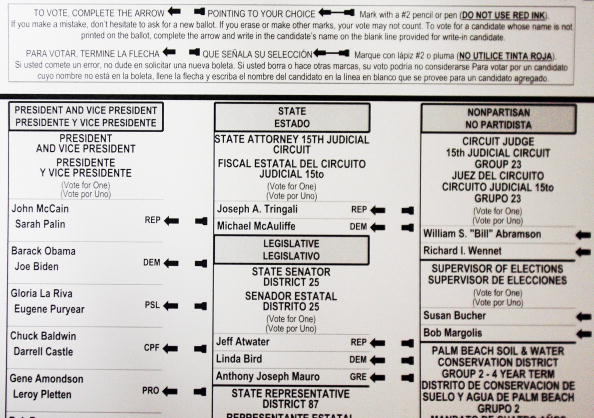 A ballot from the Ascension Church in West Palm Beach. (Source: Getty Images)

Following a mad rush of voters waiting for polls to open, the majority of locations saw voter traffic dwindling to a slow but steady stream. Voters that showed up in the 10:00 a.m. to noon window appeared shocked to avoid waiting in line. Officials attributed the let-up to the record early and absentee votes cast in the last month. Poll workers at Lakeland’s Lake Gibson United Methodist Church took advantage of the break to enjoy pizza before the after-work onslaught.

The Central Florida area between the outskirts of Tampa and Orlando is a curious mix of old Florida, with agriculture, aging industrialization, and a rapidly expanding urban sprawl. McCain’s success is critical in this area to offset Obama’s strength in more populated areas. However, McCain cannot take this area for granted as evidenced by a self-described as an elderly, white, independent voter who hasn’t voted since casting her ballot for Bill Clinton.

She explained that since Clinton, no one has moved her quite the way Obama does. She mentioned her adult children who work hard and still struggle. Her belief was that Obama had a much better understanding of the middle class and would best help the country.

Pat Barton, a Republican, voted for McCain saying, “He represents what I believe as an American, and Obama’s inexperience scares me.â€ Referring to Obama, she says, “I pray the wisdom of this young man coming in (Obama) will unify us. I don’t know why but it seems we as a nation are heading in different directions.â€