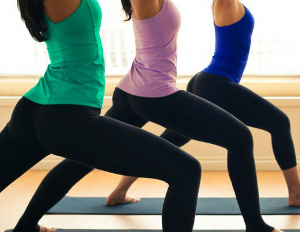 Athletic clothing maker Lululemon Athletica said it expects its first quarter sales to be down due to a recall of their popular yoga pants. The company said it was pulling the pants from its store shelves and website because of quality issues in the material.

Due to a problem at the factory, “the ingredients, weight and longevity qualities ofÂ the pants remain the same but the coverage does not, resulting in a level ofÂ sheerness in some of our women’s black Luon bottoms that falls short of our veryÂ high standards,â€ the company said in a statement on Monday. Lululemon says the problem affects about 17% of all the ladies pants in its stores.

The company, which posted a very comprehensive FAQ on the situation, says they first noticed the problem on March 11th as part of their weekly call with store managers. They’ve also removed the problematic pants from stores shelves and are issuing an exchange or refund to customers who purchased the faulty pants.

As a result of the yoga pants crisis, the Canadian company said its first-quarter sales and revenue would suffer. Lululemon now expects revenue of $333 million to $343 million. The company had previously expected revenue of $350 million to $355 million.

Dennis “Chip” Wilson founded Lululemon after his first yoga class in 1998. Lulu’s first store opened in 2000, and the company went public in 2007. The brand reported $1 billion in sales for the first time in January 2012 and is valued near $10 billion.