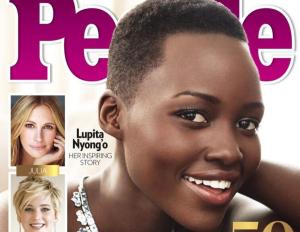 After winning an Oscar for the first time, Lupita Nyong’o was named “Most Beautiful” by People magazine.

The issue, which features the 50 Most Beautiful people, will hit newsstands, Friday, April 25th. The rising star has had a spectacular year since winning the Academy Award for Best Supporting Actress for her role in ’12 Years a Slave.’

‘It was exciting and just a major, major compliment,’ Nyong’o said of gracing the cover. ‘I was happy for all the girls who would see me on (it) and feel a little more seen.’

Lupita also stated, her mother, Dorothy ‘always said I was beautiful, and I finally believed her at some point.’