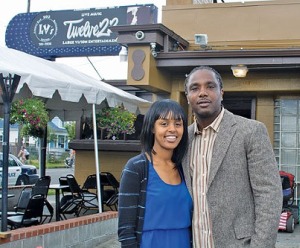 LV’s Twelve-22 is a neighborhood institution in the Boise-Eliot section of Oregon. Formerly known as The Royal Esquire and before that The Texan, the bar has been a black gathering spot for half a century. But in response to a series of complaints, the Oregon Liquor Control Commission (OLCC) is not renewing its liquor license. Many in the neighborhood say the bar is a victim of gentrification and was never given a chance to run as a successful business. Others say the bar’s history of drug and gang activity lead to its downfall.

“Back in the day I would know everyone on the block,â€ said Norman Sylvester, a performer and regular at LV’s. “That’s what’s missing with the gentrification of our community. It takes away the cohesiveness of the African American community. You see everybody at church on Sunday but as far as having relatives come in from, say Louisiana, what African American business would you take them to that’s big enough and thriving enough?â€

One member of the Boise Neighborhood Association remembers the bar when it was The Texan and says the drug problems have been there way before the new owner took over. Kay Newell, who has been on the board for over 18 years, says the location and the lack of businesses being open at the same hours lead to the bar receiving an unfair amount of attention from the police.

“Unfortunately, LV is taking the brunt of it but the problems are still going to be in our community. We’re still going to have the same negative activities going on that have been happening forever.â€

The OLCC disagrees with the premise that LV’s was unfairly targeted. In an email statement from public affairs specialist Christie Scott, they stated “While it maybe be true that there are historical problems with drugs in the Boise neighborhood, the charges in this case stem from the activity occurring at the licensed premises. The neighborhood is changing, and that creates tensions. Nevertheless, neither the neighborhood history nor the neighborhood tensions were the basis for these charges.â€

LV’s owner, La Von Van, says things were looking up for his bar especially after being mentioned in The Oregonian, a local newspaper.

“Would the Oregonian do an article like that if it weren’t?â€

Van says he’s relieved the bar is closing because he’ll no longer have to deal with the legal issues, and thanks God he was a part of one of the last black businesses in the area. Sylvester says he’ll continue to fight until the last day to keep the bar open, because the larger issue is to preserve the history in people’s minds.

“If you remember the history of that area, share that history with your family and friends…that history is saved in the minds of the community at large.â€