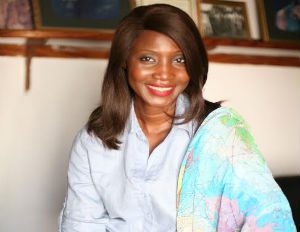 It’s not every day one goes from being a fashion model to becoming a miner. But that’s the fascinating career arc of Tiguidanke Camara, remembered in the fashion world simply as Tigui.

Camara is the daughter of Mohamed Mounir Camara, a former Governor and currently the political advisor to the Prime Minister of Guinea Conakry

She is Chairman and CEO of Camara Gold and Mining Network and the CEO of Tigui Mining Group. Her companies acquire and develop mining assets with a focus on gold, diamond and associated minerals.

So how does a model go from elevated runways in the fashion capitals of the world to looking and panning for gold and diamonds 2 miles beneath the earth?

Camara began her work on the runaway when she was fourteen. A rare achievement at the time in her native Guinea. While still modeling she graduated early from high school and received her college degree in Business Management in Morocco.

Then in 1996 she hit the U.S to try her luck in entertainment. She was discovered in New York by Hilory Beckford Management, the company owned by the mother of supermodel Tyson Beckford.

Her whirlwind career included features in Essence Magazine, GQ, Marie Claire. She also featured in music videos, “Shaft 2000”, alongside the late, great Isaac Hayes, “Notorious” the remix by Sean Combs and Lil Kim and “Let’s Not Play The Game”, by Maxwell. She also featured in Reebok Commercials with Allan Iverson.

Black Enterprise caught up with Camara while she is sidelined in Abidjan, the economic capital of Cote D’Ivoire, waiting for the Ebola Outbreak to run its course. She is one of thousands of entrepreneurs forced to keep put their business on hold, a process costing them and West Africa millions every day.

Her company recently expanded, opening an office in Cote D’Ivoire.

She tells BE, “We opened our office in February and we are in negotiation to acquire some licenses in gold and diamond fields so this is now one of our bases.”

Cocoa is the main export of Cote D’Ivoire – but the nation also boasts a thriving mining sector. The United Nations had placed an embargo there to prevent the sale of Blood Diamonds but the embargo was lifted three months ago. Now many of the major mining companies are setting up shop.

We asked her how she went from modeling to mining.

“Being in the modeling field we get to meet so many people as we model clothing, jewelry fashion, etc. I made a lot of friends who were jewelers and they had companies in Africa. That’ when I first got wind of the opportunities. I figuredÂ  it might be a good idea for me to look into it. And I’ve always been aware that the mining sector is a major driver for development, because our African countries are very rich in mineral resources and the government decided to put in place development programs to improve the mining sector.”

She tells us one of the reasons she decided to bet it all on mining was because there were few women involved at the time.