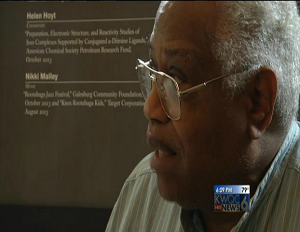 Alva Earley of Illinois is finally receiving the academic recognition that he should have been awarded more than five decades ago.

In 1959, Earley was denied a high school diploma after taking a stand against segregation. As a senior at Galesburg High School in Illinois, Earley and a group of friends attended an NAACP picnic at Lake Storey Park and decided to sit in a whites-only area. His actions led to a notification by his school that he would not be able to graduate or receive his high school diploma, leaving two colleges that had already accepted Earley to withdraw their offers.

Earley received his diploma last Friday after former classmates fought for him to receive his academic honor once learning of the incident at a Knox College reunion.

“Alva deserved it,” says Lowell Peterson, a former high school and college classmate who helped to organize the diploma ceremony. “When people have been mistreated, we owe it to them to address the injustice. This is just a little chance to make something right.”

Peterson and other classmates brought the incident to Galesburg Superintendent Bart Arthur’s attention, and after reviewing high school transcripts, Arthur agreed that a diploma was well overdue for Earley.

“I’m sure there are people who aren’t happy about it,” Arthur says. “But it wasn’t my decision. He had the grades and he deserved the diploma.”

After attending Galesburg Knox College, Earley earned a law degree from Chicago-Kent College of Law and worked for the state for more than 20 years before retiring in 2001.