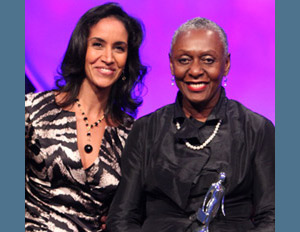 Clarke & Hardison at the 2011 Women of Power Summit

In a classic work-life clash, when this year’s BE Women of Power Summit dates were set, I realized (too late) that it overlapped with my children’s winter break. As Editorial Director of the annual four-day event, you’d think I would have taken care to avoid such a conflict. But, I blew that.

So, in an attempt to “have it all,â€ I took my two children to Orlando the weekend before the event began so we could spend four days hanging out together before Mommy spent the other half of their vacation at work. The plan was for my son to go home mid-week, while my 16-year-old daughter stayed to attend the conference for the first time.

We had a ball together–not a given when you’re sharing a hotel room with two teenagers prone to indecisiveness and bickering and you still have work to fit into the mix. We checked out Seaworld and Aquatica. We swam with dolphins at Discovery Cove. We even decided that the two-hour wait to get into Universal Studios’ Harry Potterville was well worth it.

So when we sat down to eat breakfast on the morning my son was leaving, as warm Florida sunshine streamed into the Ritz Carlton’s Vineyard Grill, everybody felt really good. Then I looked over and saw my child holding his bacon in his fist, chomping it down like he’d been raised by wolves.

“Because you’re taking your first solo flight today,â€ I said, in a carefully controlled tone, “and because I want our parting to be pleasant just in case I never see you again, I’m not going to go off on the fact that you are 13 years old, sitting in a restaurant, eating your meal with your hands. But I want you to know that when I see you do stuff like this, I feel like I’ve failed as a mother.â€

Grinning amiably, bacon paused in mid-air, this young man, who is now my height and outgrows new jeans and sneakers almost monthly, said: “Mom, I’m not high, I’m not ghetto, and I bathe on the regular. I think you’re doing okay.â€

I laughed until I could hardly breathe. It was one of those out-of-the-mouths-of-babes moments. It was a call to stop sweating the small stuff, a lighthearted plea for me to give him–and myself–a break.

We both needed one and, as Women of Power Legacy Award winner Bethann Hardison would remind me when I told her the story, “He was right! I don’t care where you are, bacon is meant to be eaten with your hands.â€

It might surprise actor Kadeem Hardison of A Different World fame, to hear his mother offer my son that pass. By her own admission, as a young, single mom raising her only child, Bethann didn’t play.

Take the time 3-year-old Kadeem, sick of waiting on a train, hauled off and kicked her.

“I took that little boy by the back of his shirt and hung him over the tracks and said, ‘Don’t you ever!’ His little feet were flapping and people were watching and I told him, ‘That train will come and, after, they won’t even know what pieces of you to scrape up.’ I don’t know if that’s why, but from that point on, I don’t think he ever said no to me again about anything.â€

While those more dramatic lessons might make a lasting impact, Bethann says the real key to child-rearing is to keep a constant conversation going, even when they have little to say, and especially when we think they’re not listening because “most likely, that’s when they are.â€

The things she’s proudest of in Kadeem–his sense of honesty, integrity and the way he honors and respects the people in his life, especially his 14-year-old daughter, Sophia–Bethann claims she didn’t teach him directly at all.

“A lot of what your children become is not necessarily what you teach them,â€ she says. “It’s in their DNA. It’s who they came here to be.â€

And what did Kadeem teach her? She doesn’t hesitate: “Have faith. You don’t have to be there all the time to have everything turn out okay.â€ I’ll raise a strip of bacon to that!