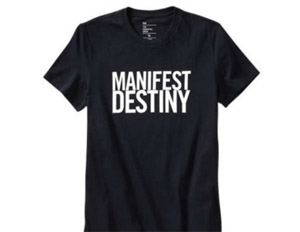 In an effort to appease disgruntled consumers, the GAP has pulled a controversial shirt off of its shelves and website.

The shirt was created by an up-and-coming designer, Mark McNairy, in a partnership the GAP has with GQ.

The shirt which has the words “Manifest Destiny” written on it enraged customers and even prompted a petition on Change.org. The petition stated the shirtÂ “promotes a belief that has resulted in the mass genocide of indigenous people, and it serves to normalize oppression.â€