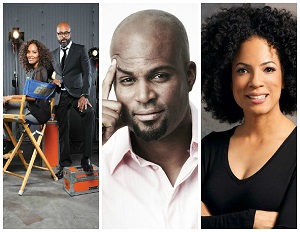 While praise is often given to those in front of the camera, it’s the power players behind-the-scenes whose hard work and creativity is the driving force behind today’s top shows on television.

On Saturday, the American Black Film Festival held “The Life of a Showrunner” panel, presented by Prudential Financial Services and moderated by Black Enterprise’s SVP/Executive Editor-at-Large Alfred Edmond Jr. Industry leaders Janine Sherman Barrois, Chris Spencer and Mara and Salim Akil opened up about their start in the industry and the work they put in to bring diversity to television and film.

“Me and Mara do black on purpose. Our characters don’t just happen to be black,” said Salim on he and his wife’s commitment to bringing the complexity of African Americans to Hollywood.

As the creator of the BET hit series Being Mary Jane, Mara talked about her start in the industry as a stage production assistant and using the support of her peer network to navigate her way up the industry. She credited her education and journalism degree from Northwestern University as the foundation for her confidence in her craft and said that although she started as a production assistant, she remained mindful of her goal to become a writer.

“I’m a stage PA who’s a writer,” Akil said she would tell people.

Her key to success she said is her willingness to always do the work and constantly write, with the rest of the panel chiming in agreement about the need for young people to get their hands dirty before they are promoted to running an entire show.

Barrois, who is known as the executive producer of Criminal Minds, said Mara and Gina Prince-Bythewood’s work inspired her to become a show runner. She got her start in the industry by participating in Warner Bros. television writers program. From there, she worked as a writer on Lush Life and The Jamie Foxx Show before going on to be a co-producer of The PJs. Her work then caught the attention of John Wells and from there she said he became her big break of advocacy.

Spencer echoed the advice of the other panelists about being willing to put in the work to move your way up the industry ladder and talked about his transition from being a stand-up comedian to working both in front of the camera and behind-the-scenes in Hollywood. As the creative genius behind The Real Husbands of Hollywood, Spencer talked about bringing the hilarious series to life and being sure that he chose the right team of people to be on board with the project. As a funnyman himself, Spencer also dished a few words of advice for young comedians today, urging them to make sure their material is quality enough to hold the attention of a crowd beyond that of a short video on Instagram.

For complete coverage of the 2015 American Black Film Festival, visit www.blackenterprise.com/tag/abff or follow along on social media using #ABFF2015.