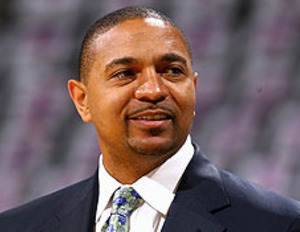 If you watched game one of the 2014 NBA Eastern Conference Finals between the Miami Heat and the Indiana Pacers on ABC, some of you probably recognized an old face and heard an old voice running commentary on the game.

Former ESPN analyst turned NBA coach Mark Jackson has reunited with his old friend and former coach Jeff Van Gundy and play-by-play commentator Mike Breen after landing his old job back less than two weeks after he was fired as Head coach of the Golden State Warriors.

Jackson previously served as an ESPN NBA analyst for five years between 2006 and 2011. He then landed a job as head coach of the Golden State Warriors, a stint which lasted three seasons, but was let go earlier this month.

According to ESPN, Jackson has inked a multi-year deal with the network to return as an NBA game analyst. He is scheduled to work the NBA Eastern Conference finals and the NBA Finals, joining Van Gundy and Breen once again in the commentary booth.

Jackson led the Golden State Warriors to the playoffs over the last two seasons. With Jackson at the helm, the “Dubs” finished this season with a winning record, 51-31, but it wasn’t enough to save his job. He was fired after the Warriors lost to the Los Angeles Clippers in the first round of the playoffs.

Steve Kerr, another former NBA player and NBA analyst without coaching experience has been hired as head coach of the Warriors. Kerr also served as General Manager for the Phoenix Suns.

Jackson played 17 seasons in the NBA and is fourth all-time on the career assists list. According to ESPN, “Jackson went 121-109 in three seasons with Golden State, which reached the postseason each of the last two years. He had been mentioned as a possible candidate for the New York Knicks‘ vacant head coaching position.”

ESPN’s Bomani Jones @bomani_jones tweeted, “Ultimately, the warriors fired the guy the roster liked for a guy the owner liked. Man, this is gonna be fun to watch.”

Jackson was given a welcome back hug and words of encouragement at the game by LeBron James.

According to the San Jose Mercury News, Jackson isn’t dwelling on the circumstances of his leaving Golden State. He tells them, “I’m a guy that’s totally at peace. That hasn’t changed.Â When the opportunity presents itself, I’ll be coaching or doing something else. I’m totally at peace and fine with waiting for the next move. And that’s if I never coach again and that’s if I coach again. That hasn’t changed.Â I will continue to conduct myself and carry myself as consistent as the public has seen, not just for three years but for my entire life.”