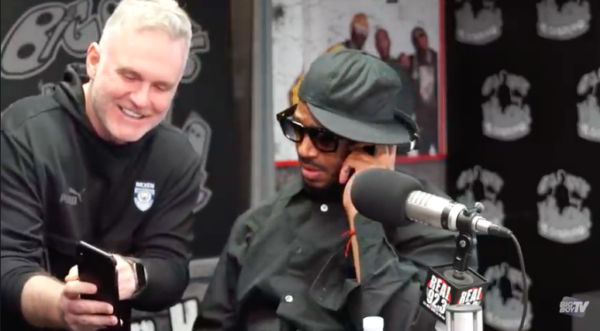 Marlon Wayans had nothing but jokes after being introduced to his white fourth cousin.

The White Chicks star was surprised during a recent appearance on Big Boy TV when the radio personality connected him to his fourth cousin, Sean Valentine. With the two being on opposite sides of the racial spectrum, Wayans was clearly taken aback and joked that was his cousin “on the rape side” of the family.

Valentine, a radio personality who hosts his own show, Valentine in The Morning, confirmed to Wayans that they were indeed fourth cousins.

“Are you crazy? No way,” Wayans said in disbelief. But when Big Boy repeated the shocking information, Wayans jokingly shouted,

Wayans, who had previously received his DNA results, went on to make the correlation on how he was related to the white radio host.

“Here’s why it’s crazy. Are you Irish?” Wayans asked. When Valentine confirmed that he was 100% Irish, Wayans revealed his Irish descent.

“So your great-grandpa raped my great-grandma,” Wayans jokingly said.

Big Boy added to the awkward but humorous moment by noting how the cousin’s first meeting “didn’t work out well.”

Valentine explained how he “just wanted to say hello” to the comedian after previously getting snubbed in a DM conversation.

Wayans was quick to clap back.